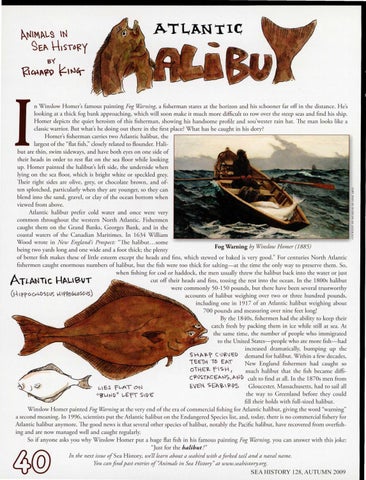 1?\~~~9 ~\tJ6r n Winslow H o mer&#39;s famous painting Fog Warning, a fisherman stares at rhe ho rizo n and his schoo ner far off in the distan ce. H e&#39;s looking at a thick fo g bank approaching, which will soon make it much more difficult to row over the steep seas and find his ship. Homer depicts the quiet heroism of this fi sherman, showing his handsom e profile and sou&#39;wester rain hat. The m an looks like a classic warrior. Bur what&#39;s he doing our there in the first place? What has he caught in his dory? Homer&#39;s fi sherman carries two Atlantic halibut, the largest of the &quot;flat fish,&quot; closely related to flound er. H alibut are thin, swim sideways, and have both eyes on o ne side of their heads in order to rest flat on the sea floo r while looking up. Homer painted the halibut&#39;s left side, the underside when lying on the sea floor, whi ch is bright white or speckled grey. Their right sides are olive, grey, or chocolate brown, and often splotched, particularly wh en they are younger, so they can blend into the sand, gravel, or clay of the ocean bottom when viewed from above. Atlantic halibut prefer cold water and once were very common throughout the wes tern No rth Atlantic. Fishermen caught them on the G rand Banks, Georges Bank, and in the coastal wa ters of the Canadian M aritimes. In 1634 W illian1 Wood wro te in New England&#39;s Prospect: &quot;&#39;lhe halibut. . .so me Fog Warning by Winslow H omer (1885) being two yards long and one wide and a foot thick; the plen ty of better fish makes these of little esteem except the heads and fins, which stewed or baked is very good .&quot; Fo r centuries No rth Atlantic fishermen caught enormous numbers of halibut, bur the fish were too thick for salting-at the rime th e o nl y way to preserve them . So, when fishin g for cod or haddock, the m en usually threw the halibut back into the wa ter o r just cut off their heads and fins, tossing the rest into rhe ocean. In the 1800s halibut were commonly 50- 150 po unds, but there have been several trustwo rth y accounts of halibut weighing over two or three hundred pounds, including one in 19 17 of an Atlantic halibut weighing about 700 po unds and measuring over nine feet long! By rhe 1840s, fishermen had the ability to keep their catch fresh by packing them in ice while still at sea. Ar the same time, the number of people who immigrated to the Uni ted States-people who ate more fish- had increased dramati cally, bumping up the S~P.., ÂĽ-&#39;? C IJ ~\J ct&gt; demand for halibut. W ithin a few decades, \~Ell-I ID EP\T N ew England fishermen had caught so o\1-\~I!- f-\ s 1:-\) much halibut that the fish becam e difficl&#39;!vS.T,~.q~&quot;&#39;t-lS , t&gt;-t:-lCi culr to find at all. In the 1870s men from E\18&#39;\ SÂŁ&quot;&#39;~\&#39;f-i(S Gloucester, M assachusetts, had to sail all t..\ES fL.f\T ON the way to G reenlan d before they could &#39;&#39; ~1..-1iJD \...tfT S\i;&gt;c fill their holds with full-sized halibut. Winslow H o mer painted Fog Warning at the very end of the era of commercial fi shing fo r Atlanti c halibut, giving the word &quot;warning&quot; a second meaning. In 1996, scientists put the Atlantic halibut on the Endangered Species list, and, today, there is no commercial fishery fo r Atlantic halibut anymore. The good news is that several other species of halibut, notably th e Pacific halibut, have recovered from overfishing and are now managed well and caught regularly. So if anyo ne as ks you why Winslow H omer put a huge Rat fish in his famous painting Fog Wa rning, yo u can answer with this joke: &quot;Just for the halibut !&quot; In the next issue of Sea History, we&#39;ll learn about a seabird with a forked tail and a naval name. You can find past entries of&quot;Animals in Sea H istory&quot; at www.seahisto ry.org. 11