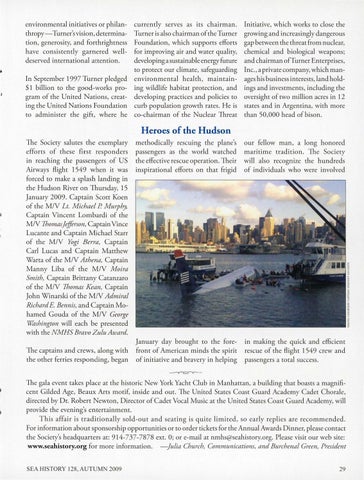 currently serves as its chairman. Turner is also chairman of the Turner Foundation, which supports efforts for improving air and water quality, developing a sustainable energy future to protect our climate, safeguarding In September 1997 Turner pledged environmental health, maintain$1 billion to the good-works pro- ing wildlife habitat protection, and gram of the United Nations, creat- developing practices and policies to ing the United Nations Foundation curb population growth rates. He is to administer the gift, where he co-chairman of the Nuclear Threat

Initiative, which works to close the growing and increasingly dangerous gap between the threat from nuclear, chemical and biological weapons; and chairman ofTurner Enterprises, Inc., a private company, which manages his business interests, land holdings and investments, including the oversight of two million acres in 12 states and in Argentina, with more than 50,000 head of bison.

Heroes of the Hudson The Society salutes the exemplary methodically rescuing the plane&#39;s efforts of these first responders passengers as the world watched in reaching the passengers of US the effective rescue operation. Their Airways Bight 1549 when it was inspirational efforts on that frigid forced to make a splash landing in the Hudson River on Thursday, 15 January 2009. Captain Scott Koen of the M/V Lt. Michael P Murphy, Captain Vincent Lombardi of the M/V ThomasJefferson, Captain Vince Lucante and Captain Michael Starr of the M/V Yogi Berra, Captain Carl Lucas and Captain Matthew Warra of the M/V Athena, Captain Manny Liba of the M/V Moira Smith, Captain Brittany Catanzaro of the M/V Thomas Kean, Captain John Winarski of the M/V Admiral Richard E. Bennis, and Captain Mohamed Gouda of the M/V George Washington will each be presented with the NMHS Bravo Zulu Award. January day brought to the foreThe captains and crews, along with front of American minds the spirit the other ferries responding, began of initiative and bravery in helping

our fellow man, a long honored maritime tradition. The Society will also recognize the hundreds of individuals who were involved

in making the quick and efficient rescue of the Bight 1549 crew and passengers a total success.

The gala event takes place at the historic New York Yacht Club in Manhattan, a building that boasts a magnificent Gilded Age, Beaux Arts motif, inside and out. The United States Coast Guard Academy Cadet Chorale, directed by Dr. Robert Newton, Director of Cadet Vocal Music at the United States Coast Guard Academy, will provide the evening&#39;s entertainment. This affair is traditionally sold-out and seating is quite limited, so early replies are recommended. For information about sponsorship opportunities or to order tickets for the Annual Awards Dinner, please contact the Society&#39;s headquarters at: 914-737-7878 ext. O; or e-mail at nmhs@seahistory.org. Please visit our web site: www.seahistory.org for more information. -Julia Church, Communications, and Burchenal Green, President