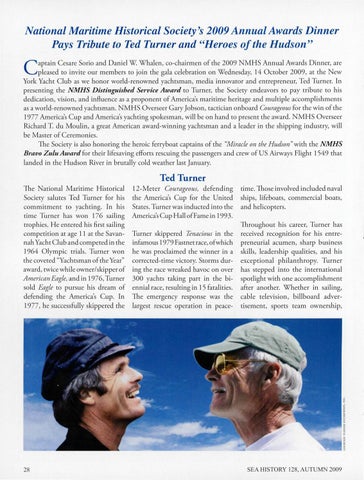 aptain Cesare Sorio and Daniel W Whalen, co-chairmen of the 2009 NMHS Annual Awards Dinner, are pleased to invite our members to join the gala celebration on Wednesday, 14 October 2009, at the New York Yacht Club as we honor world-renowned yachtsman, media innovator and entrepreneur, Ted Turner. In presenting the NMHS Distinguished Service Award to Turner, the Society endeavors to pay tribute to his dedication, vision, and influence as a proponent of America&#39;s maritime heritage and multiple accomplishments as a world-renowned yachtsman. NMHS Overseer Gary Jobson, tactician onboard Courageous for the win of the 1977 America&#39;s Cup and America&#39;s yachting spokesman, will be on hand to present the award. NMHS Overseer Richard T. du Moulin, a great American award-winning yachtsman and a leader in the shipping industry, will be Master of Ceremonies. The Society is also honoring the heroic ferryboat captains of the &quot;Miracle on the Hudson&quot; with the NMHS Bravo Zulu Award for their lifesaving efforts rescuing the passengers and crew of US Airways Flight 1549 that landed in the Hudson River in brutally cold weather last January.

Ted Turner The National Maritime Historical Society salutes Ted Turner for his commitment to yachting. In his time Turner has won 176 sailing trophies. He entered his first sailing competition at age 11 at the Savannah Yacht Club and competed in the 1964 Olympic trials. Turner won the coveted &quot;Yachtsman of the Year&quot; award, twice while owner/ skipper of American Eagle, andin 1976, Turner sold Eagle to pursue his dream of defending the America&#39;s Cup. In 1977, he successfully skippered the

12-Meter Courageous, defending the America&#39;s Cup for the United States. Turner was inducted into the America&#39;s Cup Hall ofFame in 1993. Turner skippered Tenacious in the infamous 1979 Fastnet race, ofwhich he was proclaimed the winner in a corrected-time victory. Storms during the race wreaked havoc on over 300 yachts taking part in the biennial race, resulting in 15 fatalities. The emergency response was the largest rescue operation in peace-

time. Those involved included naval ships, lifeboats, commercial boats, and helicopters. Throughout his career, Turner has received recognition for his entrepreneurial acumen, sharp business skills, leadership qualities, and his exceptional philanthropy. Turner has stepped into the international spotlight with one accomplishment after another. Whether in sailing, cable television, billboard advertisement, sports team ownership,