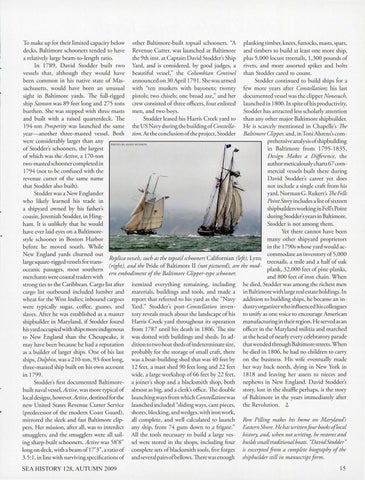 To make up for their limited capacity below other Baltimore-built topsail schooners. &#39;&#39;A planking timber, knees, futtocks, masts, spars, decks, Baltimore schooners tended to have Revenue Cutter, was launched at Baltimore and timbers to build at least one more ship, the 9th inst. at Captain D avid Scodder&#39;s Ship plus 5,000 locust treenails, 1,300 pounds of a relatively large beam-co-length ratio. In 178 9, David Stodder built two Yard, and is considered, by good judges, a rivets, and more assorted spikes and bolts vessels that, although they would have beautiful vessel,&quot; the Columbian Centinel than Stodder cared to count. been common in his native state of Mas- announced on 30 April 1791. She was armed Stodder continued to build ships for a sachusetts, would have been an unusual with &quot;ten muskets with bayonets; twenty few more years after Constellation; his last sight in Baltimore yards. The full-ri gged pistols; two chisels; one broad axe,&quot; and her documented vessel was the clipper Nonesuch, ship Samson was 89 feet long and 275 tons crew consisted of three officers, four enlisted launched in 1800. In spireofhis productivity, burthen. She was stepped with three masts men, and two boys. Stodder has attracted less scholarly attention Stodder leased his Harris Creek yard to than any other major Baltimore shipbuilder. and built with a raised quarterdeck. The 194-ton Prosperity was launched the san1e the US Navy during the building of Constella- H e is scarcely mentioned in Chapelle&#39;s The year-another three-masted vessel. Both tion. At the conclusion of the project, Stodder Baltimore Clipper, and, in ToniAhrens&#39;s comwere considerably larger than any l&#39;H QTO BY ELIOT H UDSON prehensive analysis ofshipbuilding of Scodder&#39;s schooners, the largest in Baltimore from 1795- 1835, of which was the Active, a 170-ton Design Makes a Difference, the two-masted schooner completed in author meticulously charts 67 commercial vessels built there during 1794 (not to be confused with the revenue cutter of the same name David Stodder&#39;s career yet does that Stodder also builr). nor include a single craft from his yard. Norman G. Rukerc&#39;s The Fells Stodder was a New Englander who likely learned his trade in Point Story includes a list ofsixteen shipbuilders working in Fell&#39;s Point a shipyard owned by his father&#39;s during Scodder&#39;s years in Baltimore. cousin, Jeremiah Stodder, in HingStodder is not among them . ham . It is unlikely that he would Yet there cannot have been have ever laid eyes on a Balrimoremany other shipyard proprietors style schooner in Boston Harbor in the 1790s whose yard would acbefore he moved south . While commodate an inventoryof5,000 New England yards churned out Replica vessels, such as the topsail schooners Californian (Left), Lynx treenails, a mile and a half of oak large square-ri gged vessels for trans(right), and the Pride of Baltimore II (not pictured), are the modoceanic passages, most southern plank, 32,000 feet of pine planks, ern embodiment ofthe Baltimore Clipper-type schooner. and 800 feet of iron chain. When merchan rs were coastal traders with strong ties to the Caribbean. Cargo list after itemized everything remaining, including he died, Stodder was among the richest men cargo list outbound included lumber and materials, buildings and tools, and made a in Baltimore with large real estate holdings. In wheat for the West Indies; inbound cargoes report that referred to his yard as the &quot;Navy addition to building ships, he became an inwere typically sugar, coffee, guano, and Yard .&quot; Scodder&#39;s post-Constellation inven- dustry organizer who influenced his colleagues slaves. After he was established as a master tory reveals much abo ut the landscape of his to unify as one voice to encourage American shipbuilder in M aryland, if Stodder found Harris Creek yard throughout its operation manufacturing in their region. He served as an his yard occupied with ships more indigenous from 1787 until his death in 1806. The sire officer in the Maryland militia and marched ro New England than the Chesapeake, it was dotted with buildings and sheds. In ad- at the head of nearly every celebratory parade may have been because he had a reputation dition to two boar sheds ofindeterminare size, that wended through Baltimore streets. When as a builder of larger ships. One of his last probably for the storage of small craft, there he died in 1806, he had no children to carry ships, Dolphin, was a 210-ron, 93-foot long, was a boat-building shed that was 40 feet by on the business. His wife eventually made three-masted ship built on his own account 12 feet, a mast shed 90 feet long and 22 feet her way back north, dying in New York in wide, a large workshop of 66 feet by 22 feet, 1818 and leaving her assets to nieces and in 1799. Stodder&#39;s first documented Baltimore- a joiner&#39;s shop and a blacksmith shop, both nephews in New England. David Stodder&#39;s built naval vessel, Active, was more typical of almost as big, and a clerk&#39;s office. The double story, lost in the shuffle perhaps, is the story local designs, however.Active, destined for the launching ways from which Constellation was of Baltimore in the years immediately after new United States Revenue Cutter Service laun ched included &quot;sliding ways, cant pieces, the Revolution. .t (predecessor of the modern Coast Guard), shores, blocking, and wedges, with iron work, mirrored the sleek and fast Baltimore clip- all complete, and well calculated to launch Ron PiLLing makes his home on Maryland&#39;s pers. Her mission, after all, was to interdict any ship, from 74 guns down to a frigate.&quot; Eastern Shore. Hehas writtenfour books ofLocal smugglers, and the smugglers were all sail- All the tools necessary to build a large ves- history, and, when not writing, he restores and ing sharp-built schooners. Active was 58&#39;8&quot; sel were stored in the shops, including four builds smaLL traditional boats. &quot;David Stodder&quot; long on deck, wirha beamofl 7&#39;3&quot;, a ratio of complete sets of blacksmith tools, five forges is excerpted from a complete biography of the 3.5 : 1, in line with surviving specifications of and several pairs ofbellows. There was enough shipbuilder stiLL in manuscript form. SEA HISTORY 128, AUTUMN 2009