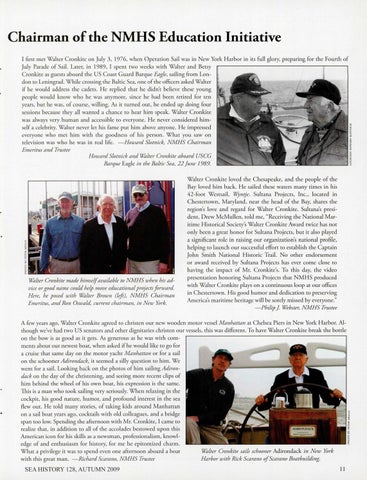 Chairman of the NMHS Education Initiative I first met Walter Cro nkite o n July 3, 1976, when Operation Sail was in New York Harbor in its full glory, preparing for the Fourth of July Parade of Sail. Later, in 1989, I spent two weeks with Walter and Betsy Cronkite as guests aboard the US Coast G uard Barque Eagle, sailing from London to Leningrad. While crossing the Baltic Sea, one of the officers asked Walter if he wo uld address the cadets. He replied that he didn&#39;t believe these yo ung people wo uld know who he was anymore, since he had been retired for ten years, but he was, of course, willing. As it turned out, he ended up doing four sessions because they all wanted a chance to hear him speak. Walter Cronkite was always very human and accessi ble to everyone. H e never considered himself a celebrity. Walter never let his fam e put him above anyone. He impressed everyone who met him with the goodness of his person. What yo u saw on televisio n was who he was in real life. -Howard Slotnick, NMHS Chairman Emeritus and Trustee Howard Slotnick and Walter Cronkite aboard USCG Barque Eagle in the Baltic Sea, 22 June 1989.

Walter Cronkite loved the Chesapeake, and rhe people of the Bay loved him back. H e sailed these waters many times in his 42-foot Westsail, Wyntje. Sultana Projects, Inc., located in Chestertown, Maryland, near the head of the Bay, shares the region&#39;s love and regard for Walter Cronkite. Sultana&#39;s president, Drew McMullen, told me, &quot;Receiving the National M aritime Historical Society&#39;s Walter Cronkite Award twice has not only been a great honor for Sultana Projects, but it also played a significant role in raising our organ ization&#39;s national profile, helping to launch our successful effort to establish the Captain John Smith National Historic Trail. No other endorsement or award received by Sultana Projects has ever come close to having the impact of Mr. Cronkite&#39;s. To this day, the video presentation honoring Sultana Proj ects that NMHS produced with Wal ter Cronkite plays on a continuous loop at our offices in Chestertown. His good humor and dedication to preserving America&#39;s maritime heritage will be sorely missed by everyone.&quot; -Philip J Webster, NMHS Trustee

A few years ago, Walter Cronkite agreed to christen our new wooden motor vessel Manhattan at Chelsea Piers in New York Harbor. Although we&#39;ve had two US senators and other dignitaries christen our vessels, this was different. To have Walter Cronkite break the bottle on the bow is as good as it gets. As generous as he was with comments abo ut our newest boat, when asked ifhe wo uld like to go for a cruise that same day on the motor yacht Manhattan or for a sail on the schooner Adirondack, it seemed a silly question to him. We went for a sail. Looking back on the photos of him sailing Adirondack on the day of the christening, and seeing more recent clips of him behind the wheel of his own boat, his expression is the sam e. This is a man who took sailing very seriously. When relaxing in the cockpit, his good nature, humor, and profound interest in the sea flew out. He told many stories, of taking kids aro und Manhattan on a sail boat years ago, cocktails with old colleagues, and a bridge span too low. Spending the afternoon with Mr. Cronkite, I came to realize rhat, in addition to all of the accolades bestowed upon this American icon for his skills as a newsman, professionalism, knowledge of and enthusiasm for history, for me he epitomized charm. What a privilege it was to spend even one afternoon aboard a boat Walter Cronkite sails schooner Adirondack in New York with this great man . -Richard Scarano, NMHS Trustee Harbor with Rick Scarano ofScarano Boatbuilding. SEA HISTORY 128, AUTUMN 2009