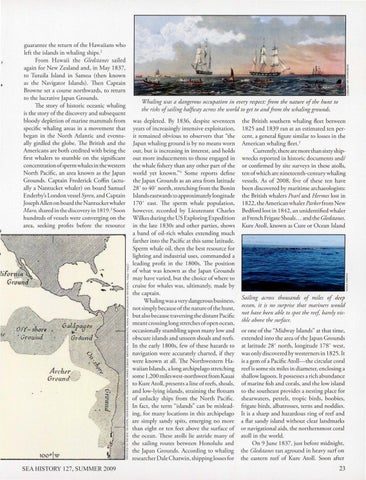 guarantee the return of the Hawaiians who left the islands in whaling ships. 2 From H awaii the Gledstanes sailed again for New Zealand and, in May 1837, to Tutuila Island in Samoa (then known as the Navigator Islands). Then Captai n Browne set a course northwards, to return to the lucrative Japan Gro unds. The story of historic oceanic whali ng is the story of the discovery and subsequent bloody depletion of marine man1mals from specific whali ng areas in a m ovement that began in the North Atlantic and eventually girdled the globe. The British and the Am ericans are both credited with being the fast whalers to stumble on the significant concentration ofsperm whales in the wes tern North Pacific, an area known as the Japan Grounds. Captain Frederick Coffin (actually a Nantucket whaler) on board Samuel Enderby&#39;s London vessel Syren, and Captain JosephAllen on board the Nantucket whaler Maro, shared in the discovery in 1819.3 Soon hundreds of vessels were converging on the area, seeking profits before the resource

Whaling was a dangerous occupation in every respect: from the nature of the hunt to the risks ofsailing halfway across the world to get to and from the whaling grounds.

was depleted. By 1836, despite seventeen years of increasingly intensive exploitation, it remained obvious to observers that &quot;the Japan whaling gro und is by no means worn out, but is increasing in interest, and holds out more inducements to those engaged in the whale fishery than any other part of the wo rld yet known.&quot; 4 Some reports define the Japan Gro unds as an area from latitude 28 ° to 40 ° north, stretching from the Bonin Islands eastwards to approxim ately longitude 170 ° east. The sperm whale population , however, recorded by Lieutenant C harles W ilkes during the US Exploring Expedition in the late 1830s and other parties, shows a band of oil-rich whales extending much farther into the Pacific at this same latitude. Sperm whale oil, then the best resource for lighting and industrial uses, commanded a ... leading profit in the 1800s. The position &quot;&#39; of what was known as the Japan Gro unds t. may have varied, but the cho ice of where ro ~ cruise for whales was, ultimately, made by ~ the captain. g~ Whaling was a very dangero us business, ~ not simply because of the nature of the hunt, ~ but also because traversing the distant Pacific ~ meant crossing long stretches of open ocean , if/&quot;&quot;&#39;&quot;&quot;&quot;&quot;_. ~ occasionally stumbling upon many low and ~~~~~~ obscure islands and unseen shoals and reefs . ~W,~~ i In the early 1800s, few of these hazards to ~ ~ navigation were accurately charted, if they were known at all. The Northwestern Ha~ wai ian Islands, a long archipelago stretching ~ some 1,200 miles west-northwest from Kauai g to Kure Atoll, presents a line of reefs, shoals, 0 ~ and low-lying islands, straining the flotsam of unlucky ships from the North Pacific. In fact, the term &quot;islands&quot; can be misleading, fo r m any locations in this archipelago are simply sandy spits, emerging no more than eight or ten feet above the surface of the ocean. 1hese atolls lie astride many of the sailing routes between Honolulu and the Japan Grounds. Accordi ng to whaling researcher Dale Chatwin, shipping losses for

the British southern whaling fleet between 1825 and 1839 ran at an estimated ten percent, a general figure similar ro losses in the American whaling fleet. 5 Currently, there are more than sixty shipwrecks reported in historic documents and/ or confirmed by site surveys in these atolls, ten of which are nineteenth-century whaling vessels. As of 2008, five of these ten have been discovered by maritime archaeologists: the British whalers Pearl and Hermes lost in 1822, theAmerican whaler Parker from New Bedford lost in 1842, an unidentified whaler at French Frigate Shoals ... and the Gledstanes. Kure Atoll, known as C ure or Ocean Island

Sailing across thousands of miles of deep ocean, it is no surprise that mariners would not have been able to spot the reef, barely visible above the surface.

or one of the &quot;Midway Islands&quot; at that time, extended into the area of the Japan Gro unds at latitude 28 &#39; north, longitude 178 &#39; west, was only discovered by westerners in 1825. It is a gem of a Pacific Atoll- the circular coral reef is some six miles in diam eter, enclosing a shallow lagoo n. Ir possesses a rich abundance of marine fi sh and corals, and the low island to the southeast provides a nesting place for shearwa&#39;ters, petrels, tropic birds, boobies, frigate birds, albatrosses, terns and noddies. It is a sharp and hazardous ring of reef and a flat sandy island wi thout clear landmarks or navigational aids, the northernmost coral atoll in the wo rld. On 9 June 1837, just before midnight, the Gledstanes ran aground in heavy surf on the eastern reef of Kure Atoll. Soon after

10 HISTORIC SHIPS ON A LEE SHORE: How to Save the United States by Charles B. Anderson • 12 The Oiler, by Neil E. Jones • 18 New Libertalia: A Pirate Dream Comes True, by Daniel Sekulich • 22 British Whaler in the Pacific: the Discovery of the Gledstanes, by Dr. Hans Van Tilburg • 28 MARINE ART: John Barber, Chronicler of the Working Chesapeake by Melissa Scott Sinclair •