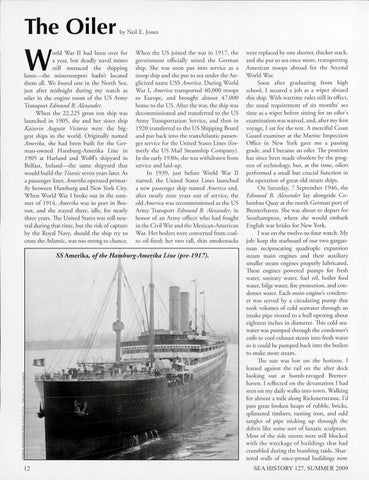 orld War II had been over for a year, but deadly naval mines still menaced the shipping lanes-the minesweepers hadn't located them all. We found one in the North Sea, just after midnight during my watch as oiler in the engine room of the US Army Transport Edmund B. Alexander. When the 22,225 gross ton ship was launched in 1905, she and her sister ship Kaiserin Auguste Victoria were the biggest ships in the world. Originally named Amerika, she had been built for the German-owned H amburg-Am erika Line in 1905 at H arland and Wolff's shipyard in Belfast, Ireland- the same shipyard that would build the Titanic seven yea rs later. As a passenger liner, Amerika operated primarily between H amburg and New York C ity. When World War I broke out in the summer of 191 4, Amerika was in port in Boston, and she stayed there, idle, for nearly three years. 1he United States was sti ll neutral during that time, but the risk of capture by the Royal Navy, should the ship try to cross the Atlantic, was too strong to chance.

W hen the US joined the war in 191 7, the government officially seized the German ship. She was soon put into service as a troop ship and she put to sea under the Anglicized name USS America. During World War I, America transported 40,000 troops to Europe, and brought almost 47,000 home to the US. After the war, the ship was deco mmissioned and transferred to the US Army Transportation Service, and then in 1920 transferred to the US Shipping Board and put back into the transAtlantic passenger service for the United States Lines (formerly the US Mail Steamship Company). In the early 1930s, she was withdrawn from service and laid-up. In 1939, just before World War II started, the United States Lines launched a new passenger ship nam ed America and, after nearly nine years out of service, the old America was recommissioned as th e US Army Transport Edmund B. Alexander, in honor of an Army officer who had fought in the C ivil War and the M exican-American War. H er boilers were converted from coalto oil-fired; her two tall, thin smokestacks

were replaced by one shorter, thicker stack, and she put to sea once more, transporting American troops abroad for the Second World War. Soon after graduating from high school, I secured a job as a wiper aboard this ship. With wartime rules still in effect, the usual requirement of six months' sea time as a w iper before sitting for an oiler's examination was waived, and, after my first voyage, I sat for the test. A merciful Coast Guard examiner at the M arine Inspection Office in New York gave me a passing grade, and I became an oiler. The position has since been made obsolete by the progress of technology, but, at the time, oilers performed a small but crucial function in the operation of great old steam ships. On Saturday, 7 September 1946, the Edmund B. Alexander lay alongside Columbus Quay at the north German port of Bremerhaven. She was about to depart for Southampton, where she would embark English war brides for New York. I was on the twelve-to-four watch. My job: keep the starboard of our two gargantuan reciprocating quadruple expansion steam main engines and their auxi liary small er steam engines properly lubricated. These engines powered pumps for fresh water, sanitary water, fuel oi l, boiler feed water, bilge water, fire protection, and condenser water. Each main engine's condenser was served by a circulating pump that rook volumes of cold seawater through an intake pipe riveted to a hull open ing about eighteen inches in diameter. This cold seawater was pumped through the condenser's coils to cool exhaust steam into fresh water so it could be pumped back into the boi lers to make more steam . The sun was low on the horizon. I leaned against the rail on the after deck looking o ut at bomb-ravaged Bremerhave n. I reAected on the devas tation I had seen on my daily walks into town . Walking for almost a mi le along Rickmerstrasse, I'd pass great broken heaps of rubbl e, bricks, sp lintered timbers, rusting iron, and odd tangles of pipe sti ckin g up through the debris like some sort of lunatic sculpture. Most of the side streets were still blocked with the wreckage of buildings that had crumbl ed during the bombing raids. Shattered walls of once-proud buildings now SEA HISTORY 127, SUMMER 2009