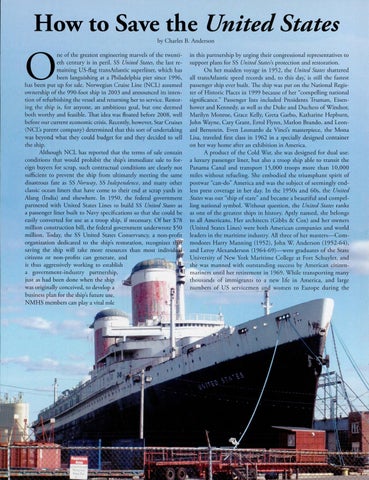 How to Save the United States by Charles B. Anderson

ne of the greatest engineering marvels of the twenti- in this partnership by urging their congressional representatives to eth century is in peril. SS United States, the last re- support plans for SS United States&#39;s protection and restoration. maining US-flag transAtlantic superliner, which has On her maiden voyage in 1952, the United States shattered been languishing at a Philadelphia pier since 1996, all rransAt!antic speed records and, to this day, is still the fastest has been put up for sale. Norwegian Cruise Line (NCL) assumed passenger ship ever built. The ship was put on the National Regisownership of the 990-foot ship in 2003 and announced its inten- ter of Historic Places in 1999 because of her &quot;compelling national tion of refurbishing the vessel and returning her to service. Restor- significance.&quot; Passenger lists included Presidents Truman, Eisening the ship is, for anyone, an ambitious goal, but one deemed hower and Kennedy, as well as the Duke and Duchess of Windsor, both worthy and feasible. That idea was floated before 2008, well Marilyn Monroe, Grace Kelly, Greta Garbo, Katharine Hepburn, before our current economic crisis. Recently, however, Star Cruises John Wayne, Cary Grant, Errol Flynn, Marlon Brando, and Leon(NC.Ls parent company) determined that this sort of undertaking ard Bernstein. Even Leonardo da Vinci&#39;s masterpiece, the Mona was beyond what they could budget for and they decided to sell Lisa, traveled first class in 1962 in a specially designed container the ship. on her way home after an exhibition in America. Although NCL has reported that the terms of sale contain A product of the Cold War, she was designed for dual use: conditions that would prohibit the ship&#39;s immediate sale to for- a luxury passenger liner, bur also a troop ship able to transit the eign buyers for scrap, such contractual conditions are clearly not Panama Canal and transport 15,000 troops more than 10,000 sufficient to prevent the ship from ultimately meeting the same miles without refueling. She embodied the triumphant spirit of disastrous fate as SS Norway, SS Independence, and many other postwar &quot;can-do&quot; America and was the subject of seemingly endclassic ocean liners that have come to their end at scrap yards in less press coverage in her day. In the 1950s and 60s, the United Alang (India) and elsewhere. In 1950, the federal government States was our &quot;ship of state&quot; and became a beautiful and compelpartnered with United States Lines to build SS United States as ling national symbol. Without question, the United States ranks a passenger liner built to Navy specifications so that she could be as one of the greatest ships in history. Aptly named, she belongs easily converted for use as a troop ship, if necessary. Of her $78 to all Americans . Her architects (Gibbs &amp; Cox) and her owners million construction bill, the federal government underwrote $50 (United States Lines) were both American companies and world million. Today, the SS United States Conservancy, a non-profit leaders in the maritime industry. All three of her masters-Comorganization dedicated to the ship&#39;s restoration, recognizes diat modores Harry Manning (1952), John W. Anderson (1952-64), saving the ship will take more resources than most individ and Leroy Alexanderson (1964-69)-were graduates of the State citizens or non-profits can generate, and University of New York Maritime College at Fort Schuyler, and is thus aggressively working to establish e==~4 &#39;: tshe was manned with outstanding success by American citizena government-industry partnership, 1 m ariners until her retirement in 1969. While transporting many just as had been done when the ship thousands of immigrants to a new life in America, and large was originally conceived, to develop a numbers of US servicemen and women to Europe during the business plan for the ship&#39;s future use. NMHS members can play a vital role

10 HISTORIC SHIPS ON A LEE SHORE: How to Save the United States by Charles B. Anderson • 12 The Oiler, by Neil E. Jones • 18 New Libertalia: A Pirate Dream Comes True, by Daniel Sekulich • 22 British Whaler in the Pacific: the Discovery of the Gledstanes, by Dr. Hans Van Tilburg • 28 MARINE ART: John Barber, Chronicler of the Working Chesapeake by Melissa Scott Sinclair •