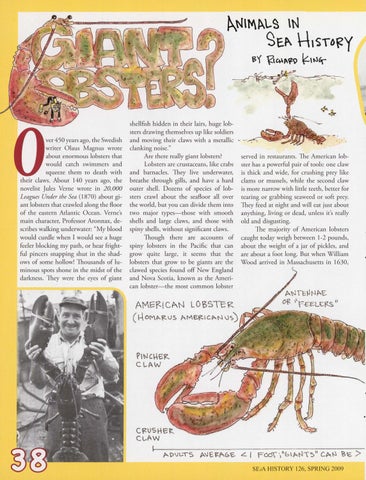 ver 450 years ago, the Swedish writer Olaus Magnus wrote about enormous lobsters that would catch swimmers and squeeze them to death with their claws. About 140 years ago, the novelist Jules Verne wrote in 20,000 Leagues Under the Sea (1870) about giant lobsters that crawled along the floor of the eastern Atlantic Ocean. Verne&#39;s main character, Professor Aronnax, describes walking underwater: &quot;My blood would curdle when I would see a huge feeler blocking my path, or hear frightful pincers snapping shut in the shadows of some hollow! Thousands of luminous spots shone in the midst of the darkness. They were the eyes of giant

shellfish hidden in their lairs, huge lobsters drawing themselves up like soldiers and moving their claws with a metallic clanking noise.&quot; Are there really giant lobsters? Lobsters are crustaceans, like crabs and barnacles. They live underwater, breathe through gills, and have a hard outer shell. Dozens of species of lobsters crawl about the seafloor all over the world, but you can divide them into two major types-those with smooth shells and large claws, and those with spiny shells, without significant claws. Though there are accounts of spiny lobsters in the Pacific that can grow quite large, it seems that the lobsters that grow to be giants are the clawed species found off New England and Nova Scotia, known as the American lobster-the most common lobster

served in restaurants. The American lobster has a powerful pair of tools: one claw is thick and wide, for crushing prey like clams or mussels, while the second claw is more narrow with little teeth, better for tearing or grabbing seaweed or soft prey. They feed at night and will eat just about anything, living or dead, unless it&#39;s really old and disgusting. The majority of American lobsters caught today weigh between 1-2 pounds, about the weight of a jar of pickles, and are about a foot long. But when William Wood arrived in Massachusetts in 1630,