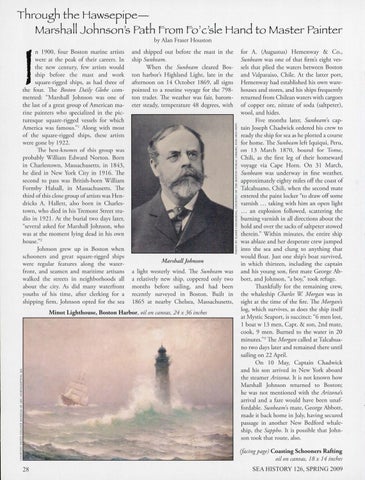 Through the HawsepipeMarshall Johnson&#39;s Path From Fo&#39;c&#39;sle Hand to Master Painter by Alan Fraser Houston n 1900, four Boston marine artists were at the peak of their careers. In the new century, few artists would ship before the mast and work square-rigged ships, as had three of the four. The Boston Daily Globe commented: &quot;Marshall Johnson was one of the last of a great group of American marine painters who specialized in the picturesque square-rigged vessels for which America was famous.&quot; 1 Along with most of the square-rigged ships, these artists were gone by 1922. The best-known of this group was probably William Edward Norton . Born in Charlestown, Massachusetts, in 1843, he died in New York City in 1916. The second to pass was British-born William Formby Halsall, in Massachusetts. The third of this close group of artists was Hendricks A. Hallett, also born in Charlestown, who died in his Tremont Street studio in 1921. At the burial two days later, &quot;several asked for Marshall Johnson, who was at the moment lying dead in his own house.&quot; 2 Johnson grew up in Boston when schooners and great square-rigged ships were regular features along the waterfront, and seamen and maritime artisans walked the streets in neighborhoods all about the city. As did many waterfront youths of his time, after clerking for a shipping firm , Johnson opted for the sea

and shipped out before the mast in the ship Sunbeam. When the Sunbeam cleared Boston harbor&#39;s Highland Light, late in the afternoon on 14 October 1869, all signs pointed to a routine voyage for the 798ton trader. The weather was fair, barometer steady, temperature 48 degrees, with

Marshall Johnson a light westerly wind. The Sunbeam was a relatively new ship, coppered only two months before sailing, and had been recently surveyed in Boston. Built in 1865 at nearby Chelsea, Massachusetts,

for A. (Augustus) Hemenway &amp; Co., Sunbeam was one of that firm&#39;s eight vessels that plied the waters between Boston and Valparaiso, Chile. At the latter port, Hemenway had established his own warehouses and stores, and his ships frequently returned from Chilean waters with cargoes of copper ore, nitrate of soda (saltpeter), wool, and hides. Five months later, Sunbeam&#39;s captain Joseph Chadwick ordered his crew to ready the ship for sea as he plotted a course for home. The Sunbeam left Iquiqui, Peru, on 13 March 1870, bound for Tome, Chili, as the first leg of their homeward voyage via Cape Horn. On 31 March, Sunbeam was underway in fine weather, approximately eighty miles off the coast of Talcahuano, Chili, when the second mate entered the paint locker &quot;to draw off some varnish ... taking with him an open light . . . an explosion fo llowed, scattering the burning varnish in all directions about the hold and over the sacks of saltpeter stowed therein.&quot; Within minutes, the entire ship was ablaze and her desperate crew jumped into the sea and clung to anything that would float. Just one ship&#39;s boat survived, in which thirteen, including the captain and his young son, first mate George Abbott, and Johnson, &quot;a boy,&quot; took refuge. Thankfully for the remaining crew, the whaleship Charles W Morgan was in sight at the time of the fire. The Morgan&#39;s log, which survives, as does the ship itself at Mystic Seaport, is succinct: &quot;6 men lost, 1 boat w 13 men, Capt. &amp; son, 2nd mate, cook, 9 men . Burned to the water in 20 minutes.&quot; 3 The Morgan called at Talcahuano two days later and remained there until sailing on 22 April. On 10 May, Captain Chadwick and his son arrived in New York aboard the steamer Arizona. It is not known how Marshall Johnson returned to Boston; he was not mentioned with the Arizona&#39;s arrival and a fare would have been unaffordable. Sunbeam&#39;s mate, George Abbott, made it back home in July, having secured passage in another New Bedford whaleship, the Sappho. It is possible that Johnson took that route, also. (facing page) Coasting Schooners Rafting oil on canvas, 18 x 14 inches