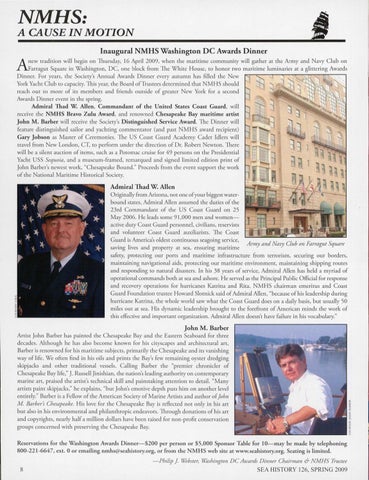 A new tradition will begin on 11rnrsday,

16 April 2009, when the maritime community will gather at the Army and Navy Club on fifarragur Square in Washington, DC, one block from The White House, to honor rwo maritime luminaries at a glittering Awards Dinner. For years, the Society&#39;s Annual Awards Dinner every autumn has filled the New York Yacht C lub to capacity. This year, the Board ofTrusrees determined rhar NMHS should reach our to more of its members and friends outside of greater New York for a second Awards Dinner event in rhe spring. Admiral Thad W. Allen, Commandant of the United States Coast Guard, will receive the NMHS Bravo Zulu Award, and renowned Chesapeake Bay maritime artist John M. Barber will receive the Society&#39;s Distinguished Service Award. The Dinner will feature distinguished sailor and yachting commentator (and past NMHS award recipient) Gary Jobson as Master of Ceremonies. The US Coast Guard Academy Cadet Idlers ~ill travel from New London, CT, to perform under the direction of Dr. Robert Newton. There will be a silent auction of items, such as a Potomac cruise for 49 persons on rhe Presidential Yacht USS Sequoia, and a museum-framed, remarqued and signed limited edition print of John Barber&#39;s newest work, &quot;Chesapeake Bound.&quot; Proceeds from rhe event support rhe work of the National Maritime Historical Society.

Admiral Thad W. Allen Originally from Arizona, not one of your biggest warerbound states, Admiral Allen assumed the duties of the 23rd Commandant of the US Coast Guard on 25 May 2006. He leads some 91,000 men and womenacrive duty Coast Guard personnel, civilians, reservists and volunteer Coast Guard auxiliarists. The Coast Guard is America&#39;s oldest continuous seagoi ng service, Army and Navy Club on Farragut Square saving lives and property at sea, ensuring maritime safety, protecting our ports and maritime infrastructure from terrorism, securing our borders, maintaining navigational aids, protecting our maritime environment, maintaining shipping routes and responding to natural disasters. In his 38 years of service, Admiral Allen has held a myriad of operational commands both at sea and ashore. He served as the Principal Public Official for response and recovery operations for hurricanes Katrina and Rita. NMHS chairman emeritus and Coast G uard Foundation trustee Howard Slotni ck said of Admiral Allen, &quot;because of his leadership during hurricane Katrina, the whole world saw what rhe Coast Guard does on a daily basis, but usually 50 miles out at sea. His dynamic leadership brought to the forefront of American minds the work of this effective and important organization. Admiral Allen doesn&#39;t have failure in his vocabulary.&quot; John M. Barber Artist John Barber has painted the Chesapeake Bay and the Eastern Seaboard for three decades. Although he has also become known for his cityscapes and architectural arr, Barber is renowned for his maritime subjects, primarily the Chesapeake and its vanishing way of life. We often find in his oils and prints the Bay&#39;s few remaining oyster dredging skipjacks and other traditional vessels . Calling Barber the &quot;premier chronicler of Chesapeake Bay life,&quot; ]. Russell Jinishian, the nation&#39;s leading authority on contemporary marine art, praised the artist&#39;s technical skill and painstaking attention to detail. &quot;Many artists paint skip jacks,&quot; he explains, &quot;bur John&#39;s emotive depth puts him on another level entirely.&quot; Barber is a Fellow of the American Society of Marine Artists and author of john M. Barber&#39;s Chesapeake. His love for the Chesapeake Bay is reflected not on ly in his art but also in his environmental and philanthropic endeavors. Through donations of his art and copyrights, nearly half a million dollars have been raised for non-profit conservation groups concerned with preserving the Chesapeake Bay. Reservations for the Washington Awards Dinner-$200 per person or $5,000 Sponsor Table for 10-may be made by telephoning 800-221-6647, ext. 0 or emailing nmhs@seahistory.org, or from the NMHS web site at www.seahistory.org. Seating is limited.