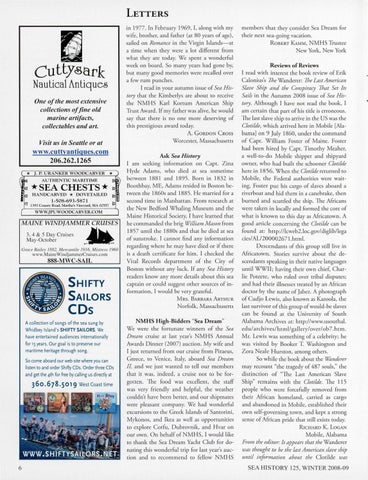 LETTERS in 1977. In February 1969, I, alo ng wi th my wife, brother, and father (at 80 years of age), sailed on Romance in the Virgin Islands-at a time when they were a lot different from what they are today. We spent a wonderful week on board. So many years had gone by, but many good memories were recalled over a few rum punches. I read in yo ur autumn issue of Sea History that the Kimberlys are about to receive the NMHS Karl Kortum American Ship Trust Award. If my fa ther was alive, he would say that there is no one more deserving of this prestigious award today. A. GORDON CROSS Worcester, Massachusetts

I Cuttysark Nautical Antiques One of the most extensive collections offine old marine artifacts, collectables and art. Visit us in Seattle or at

CDs A collection of songs of the sea sung by Whidbey Island&#39;s SHI FTYSAILORS. We have entertained audiences internationally for 15 years. Our goal is to preserve our maritime heritage through song. So come aboard our web site where you can listen to and order Shifty CDs. Order three CDs and get the 4th for free by calling us directly at

Ask Sea History I am seeking info rmation on Capt. Zina H yde Adams, who died at sea someti me berween 1881 and 1895. Born in 1832 in Boothbay, ME, Adams resided in Boston berween the 1860s and 1885. H e married for a seco nd time in Manhattan. From research at the New Bedford Whaling Museum and the Maine Historical Society, I have learn ed that he commanded the brig William Mason from 1857 until the 1880s and that he died at sea of sunstroke. I cannot find any information regarding where he may have died or if there is a death certificate for him. I checked the Vital Records department of the C ity of Boston without any luck. If any Sea History readers know any more details about this sea captain or could suggest other sources of information, I wo uld be very grateful. MRS. BARBARA ARTHUR Norfolk, M assachusetts NMHS High-Bidders &quot;Sea Dream&quot; We were the fortunate winners of the Sea Dream cruise at last year&#39;s NMHS Annual Awards Dinner (2007) auction. My wife and I just returned from our cruise from Piraeus, Greece, to Venice, Italy, aboard Sea Dream II, and we just wanted to tell our members that it was, indeed, a cruise not to be forgotten. The food was excellent, the staff was very friendly and helpful, the weather couldn&#39;t have been better, and our shipmates were pleasant company. We had wonderful excursions to the Greek Islands of Santorini, Mykonos, and Ikea as well as opponunities to explore Corfu, Dubrovnik, and H var on our own. On behalf ofNMH S, I would like to thank the Sea Dream Yacht C lub for donating this wonderful trip for las t year&#39;s auction and to recommend to fellow NMHS

members that they consider Sea Dream for their next sea-going vacation. ROBERT KAMM, NMHS Trustee New York, New York Reviews of Reviews I read with interes t the book review of Erik Calonius&#39;s The Wanderer: The Last American

Slave Ship and the Conspiracy That Set Its Sails in the Autumn 2008 issue of Sea History. Although I have nor read the book, I am certain that part of his tide is erroneous. The last slave ship to arrive in the US was the Clotilde, which arrived here in Mobile [Alabama] on 9 July 1860, under the command of Capt. W ill iam Foster of Maine. Foster had been hired by Capt. Timothy Meaher, a well-to-do Mob ile shipper and shipyard owner, who h ad built rhe schooner Clotilde here in 18 56. When rhe Clotilde returned to Mobile, the Federal authorities were waiting. Foster put his cargo of slaves aboard a riverboat and hid them in a canebrake, then burned and scuttled the ship. The Africans were taken in locally and formed the co re of what is known to this day as Africatown. A good article concerning the Clotilde can be found at: http: //lcweb2.loc.gov/ diglib/lega cies/AL/20000267 1.html. D escendants of this group still live in Africatown . Stories survive about the descendants speaking in their native languages until WWII; having their own chief, Charlie Poteete, who ruled over tribal disputes; and had their illnesses treated by an African doctor by the name of Jabez. A photograph of C udjo Lewis, also known as Kazoola, the las t survivor of this gro up of would-be slaves can be found at the University of South Alabama Archives at: http: //www. uso uthal. edu / archi ves/ html/ gallery/ over/ ob 7 .htm. Mr. Lewis was so mething of a celebrity; he was visited by Booker T. Washington and Zora Neale Hurston, among others. So while the book about the Wanderer may recount &quot;the tragedy of 487 souls,&quot; the distinction of &quot;The Last American Slave Ship&quot; remains with the Clotilde. The 115 people wh o were forcefully removed from their African homeland, carried as cargo and abandon ed in Mobi le, established their own self-governing town, and kept a strong sense of African pride that still exists today. RICHARD K. LOGAN Mobile, Alabama From the editor: ft appears that the Wanderer

was thought to be the last American slave ship until information about the Clotilde was SEA HISTORY 125, WINTER 2008-09