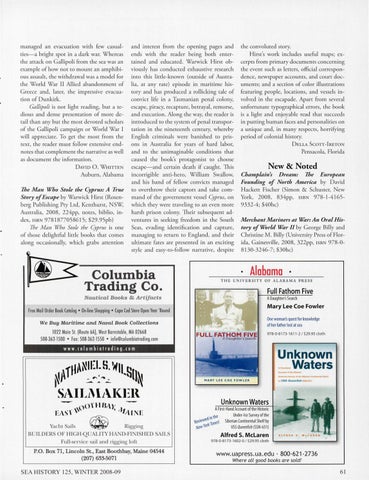 managed an evacuation with few casualties-a bright spot in a dark war. Whereas the arrack on Gall ipoli from the sea was an example of how not to mount an amphibious assault, the withdrawal was a model for the Wo rld War II Allied abandonment of G reece and , later, the impressive evacuatio n of Dunkirk. Gallipoli is nor light reading, bur a tedious and dense presentation of more derail than any bur rhe most devoted scholars of the Gallipoli campaign or World War I will appreciate. To get rhe most from the text, the reader must follow extensive endnotes that complement the narrative as well as document the in formation. DAVID

and interest from the opening pages and ends with the reader being both entertained and educated . Warwick Hirst obviously has conducted exhaustive research into this little-known (o utside of Australia, at any rare) episode in maritime history and has produced a rollicking tale of convict life in a Tasmanian penal colony, escape, piracy, recapture, betrayal, rem orse, and execution. Along the way, the reader is introduced to the system of penal transportation in the nineteenth century, whereby English criminals were banished to prisons in Australia for years of hard labor, and to the unimaginable co ndi tions that caused the book&#39;s protago nist to choose escape-and certain death if caugh t. This inco rrigible anti-hero, William Swallow, and his band of fellow convicts managed to overthrow their captors and rake command of the government vessel Cyprus, on which they were traveling to an even more harsh prison colony. Their subsequent adventures in seeking freedom in the South Seas, evading identification and capture, managing to return to England, and th eir ul timate fa res are presented in an exciting style and easy-to-follow narrative, despite

Alabama THE UN I VERSITY OF ALABAMA PRESS