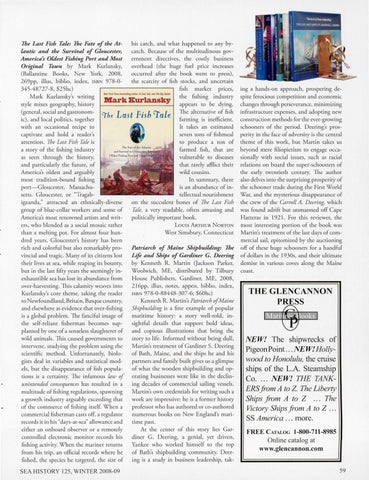 The Last Fish Tale: The Fate of the Atlantic and the Survival of Gloucester, America&#39;s Oldest Fishing Port and Most Original Town by M ark Kurlansky,

(general, social and gastronom- &#39;th e ic), and local politics, together with an occasional recipe to captivate and hold a reader&#39;s attention. The Last Fish Tale is a story of the fishing industry as seen through the history, and particularly the future, of America&#39;s oldest and arguably most tradition-bound fishing port-Gloucester, M assachusetts. G loucester, or &quot;Tragabigzanda,&quot; attracted an ethnically-diverse group of blue-collar workers and som e of America&#39;s m ost renowned artists and writers, who blended as a social mosaic rather than a melting pot. For almost four hundred years, Gloucester&#39;s history has been rich and colorful but also remarkably provincial and tragic. Many of its citizens lose their lives at sea, while reaping its boun ty, but in the las t fifty years the seemingly inexhaustible sea has lost its abundance from over-harvesting. This calami ty weaves into Kurlansky&#39;s core cheme, taking the reader to Newfoundland, Britain, Basque country, and elsewhere as evidence that over-fishing is a global problem. The fanciful image of the self-reliant fisherman becomes supplanted by o ne of a senseless slaughterer of wild animals. This caused governm ents to intervene, studying che problem using che scientifi c m ethod. Unfortunately, biologiscs deal in variables and sratistical m odels, but the disappearance of fish populations is a certainty. The infam ous Law of unintended consequences has resulted in a multi tu de of fi shing regulations, spawning a growth industry arguably exceeding that of che commerce of fishin g itself. W hen a commercial fisherman casts off, a regulator records it in his &quot;days-at-sea&quot; allowance and either an onboard observer or a remo tely controlled electronic monito r records his fishing activity. When the m ariner returns from his trip, an official records where he fished, the species he targeted, the size of

The alternative of fish farming is inefficient. Ir takes an estimated seven tons of fishmeal to produce a ton of farmed fish, that are vulnerable to diseases that rarely affiict their wild co usins. In summary, there is an abundance of intellectual nourishment on che succulent bones of The Last Fish Tale, a very readable, often amusing and politically important book.

Patriarch of Maine Shipbuilding: The Life and Ships of Gardiner G. Deering by Ke nneth R. M artin (Jackson Parker, Woolwich, M E, distributed by Tilbury House Publishers, Gardiner, M E, 2008, 2 16pp, illus, notes, appen, biblio, index, ISBN 978-0-88448-307 -6; $60hc) Ke nneth R. M artin&#39;s Patriarch ofMaine Shipbuilding is a fin e example of popular maritime history: a story well-told, insightful details that support bold ideas, and copious illustrations that bring the story to life. Informed with our being dull, M artin&#39;s treatment of Gardiner S. Deering of Bach, M aine, and the ships he and his partners and family built gives us a glimpse of what the wooden shipbuilding and operating businesses were like in the declining decades of commercial sailing vessels. Martin&#39;s own credentials for writing such a work are impressive: he is a former history professor who has authored or co-authored numerous books o n New England&#39;s m aritime pas t. At the center of th is story lies Gardiner G . D eering, a genial, yet driven , Yankee who worked himself to the top of Bath&#39;s shipbuilding community. Deering is a study in business leadership, tak-

ing a hands-o n approach, prospering despite ferocious competition and economic changes through perseverance, minimizing infras tructure expenses, and adopting new constructio n methods for the ever-growing schooners of the period. Deering&#39;s prosperi ty in the face of adversity is the central theme of this work, but M artin takes us beyond mere filiopiecism to engage occasionally with social issues, such as racial relations on board the super-schooners of the early twentieth century. The autho r also delves into the surprising prosperi ty of the schooner trade during the First Wo rld War, and the mys terio us disappearance of che crew of the Carroll A. Deering, which was found adrift but unmanned off Cape Hatteras in 192 1. Fo r this reviewer, the most interesting portion of the book was Martin&#39;s treatment of the last days of commercial sail, epitomized by the auctioning off of these huge schooners for a handful of dollars in the 193 0s, and their ultimate demise in various coves along the M aine coast.