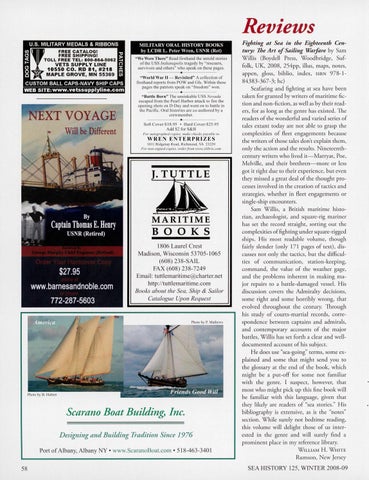 Fighting at Sea in the Eighteenth Century: The Art of Sailing Warfare by Sam Wi llis (Boydell Press, Woodbridge, Suffolk, UK, 2008, 254pp, illus, maps, notes, appen, gloss, biblio, index, ISBN 978-1843 83-367-3; he) Seafaring and fighting at sea have been taken for granted by writers of maritime fi ction and non-fictio n, as well as by their readers, for as long as the genre has existed. The readers of the wonderful and varied series of tales extant today are not able to grasp the complexities of fleet engagements because the writers of those tales don&#39;t explain them , only the action and the results. N ineteenthcentury writers who lived it- M arryat, Poe, Melville, and their brethren-more or less go t it right due to their experi ence, but even they missed a great deal of the thought processes involved in the creation of tactics and strategies, whether in Beet engagements or single-ship encounters. Sam Willis, a British maritime historian , archaeologist, and square-rig mariner has set the record straight, so rting o ut the complexities of fighting under square-rigged ships. His mos t readable volume, though fairly slender (only 17 1 pages of text), d iscusses not only the tactics, but the difficulties of communicatio n, station-keeping, command, the value of the wea ther gage, and the pro blems inherent in making m ajor repairs to a battle-dam aged vessel. H is discussion covers the Admiralty decisions, some right and some horribly wrong, that evolved th ro ughout the century. Thro ugh his study of courts-martial records, correspondence between cap tains and admirals, and contemporary acco unts of the m ajo r battles, Willis has set forth a clear and welldocumented account of his subj ect. H e does use &quot;sea-going&quot; terms, some explained and some that might send yo u to the glossary at the end of the book, which might be a put-off fo r some not fam iliar with the ge nre. I suspect, however, that most who might pick up this fine book will be familiar with this language, given that they likely are readers of &quot;sea stories.&quot; H is bibliography is extensive, as is the &quot;notes&quot; sectio n. W hile surely not bedtime readin g, this volume will delight those of us interested in the genre and will surely fi nd a prominent place in my reference library. W ILLIAM