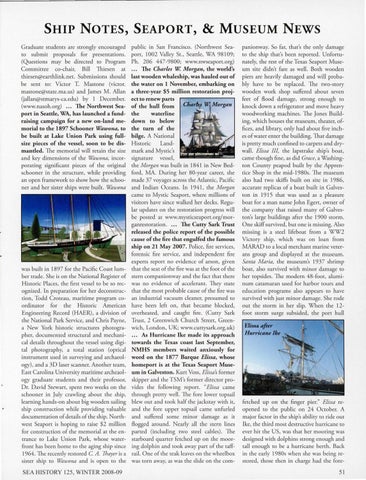 SHIP NOTES, SEAPORT, &amp; MUSEUM NEWS Graduate students are strongly encouraged ra submit proposals for presentations. (Questions may be directed to Program Committee co-chair, Bill Thiesen at thiesen@earthlink.net. Submissions should be sent to: Victor T. Mastone (victor. mastone@state.ma.us) and James M. Allan (jallan@stmarys-ca.edu) by 1 December. (www.nasoh.org) ... The Northwest Seaport in Seattle, WA, has launched a fundraising campaign for a new on-land memorial to the 1897 Schooner Wtzwona, to be built at Lake Union Park using fullsize pieces of the vessel, soon to be dismantled. The memorial will retain the size and key dimensions of the Wilwona, incorporating significant pieces of the original schooner in the structure, while providing an open framework to show how the schooner and her sister ships were built. Wilwona

was built in 1897 for the Pacific Coast !umber trade. She is on the National Register of Historic Places, the first vessel to be so recognized. In preparation for her deconstruction, Todd Croteau, maritime program coordinator for the Historic American Engineering Record (HAER), a division of the National Park Service, and Chris Payne, a New York historic structures photographer, documented structural and mechanical details throughout the vessel using digita! photography, a total station (optical instrument used in surveying and archaeology), and a 3D laser scanner. Another team, East Carolina Un iversity maritime archeaology graduate students and their professor, Dr. David Stewart, spent rwo weeks on the schooner in July crawling about the ship, learning hands-on about big wooden sailing ship construction while providing valuable documentation of derails of the ship. Northwest Seaport is hoping to raise $2 million for construction of the memorial at the entrance to Lake Union Park, whose waterfront has been home to the aging ship since 1964. The recently restored C. A. Thayer is a sister ship to Wilwona and is open to the

public in San Francisco. (Northwest Seaport, 1002 Valley St. , Seattle, WA 98 109; Ph. 206 447-9800; www.nwseaport.org) . . . The Charles W. Morgan, the world&#39;s last wooden whaleship, was hauled out of the water on 1 November, embarking on a three-year $5 million restoration project to renew parts of the hull from the waterline down to below the turn of the bilge. A National Historic Landmark and Mystic&#39;s signature vessel, the Morgan was built in 1841 in New Bedford, MA. During her 80-year career, she made 37 voyages across the Atlantic, Pacific and Indian Oceans. In 1941, the Morgan came to Mystic Seaport, where millions of visitors have since walked her decks . Regular updates on the restoration progress will be posted at www.mysticseaport. org/morganrestoration. . . . The Cutty Sark Trust released the police report of the possible cause of the fire that engulfed the famous ship on 21May2007. Police, fire services, forensic fire service, and independent fire experts report no evidence of arson, given that the seat of the fire was at the foot of the stern companionway and the fact that there was no evidence of accelerant. They state that the most probable cause of the fire was an industrial vacuum cleaner, presumed to have been left on, that became blocked, overheated, and caught fire. (Cutty Sark Trust, 2 Greenwich Church Street, Greenwich, London, UK; www.cuttysark.org. uk) . . . As Hurricane Ike made its approach towards the Texas coast last September, NMHS members waited anxiously for word on the 1877 Barque Elissa, whose homeport is at the Texas Seaport Museum in Galveston. Kurt Voss, Elissa&#39;s former skipper and the TSM&#39;s former director provides the fo llowing report. &quot;Elissa came through pretty well. The fore lower topsail blew our and rook half the jackstay with it, and the fore upper topsail came unfurled and suffered some minor damage as it flogged around. Nearly all the stern lines parted (including rwo steel cables). The starboard quarter fetched up on the mooring dolphin and took away part of the taffrail. One of the teak leaves on the wheelbox was torn away, as was the slide on the com-

panionway. So far, that&#39;s the only damage to the ship that&#39;s been reported. Unfortunately, the rest of the Texas Seaport Museum site didn&#39;t fare as well . Both wooden piers are heavily damaged and will probably have to be replaced. The rwo-story wooden work shop suffered abo ut seven feet of flood damage, strong enough to knock down a refrigerator and move heavy woodworking machines. The Jones Building, which houses the museum, theater, offices, and library, only had about five inches of water enter the building. That damage is pretty much confined to carpets and drywall. Elissa III, the lapstrake ship&#39;s boat, came though fine, as did Grace, a Washington County peapod built by the Apprentice Shop in the mid-1980s. The museum also had rwo skiffs built on site in 1986, accurate replicas of a boat built in Galveston in 1915 that was used as a pleasure boat for a man name John Egert, owner of the company that raised many of Galveston&#39;s large buildings afrer the 1900 storm. One skiff survived, but one is missing. Also missing is a steel lifeboat from a WW2 Victory ship, which was on loan from MARAD to a local merchant marine veterans group and displayed at the museum. Santa Maria, the museum&#39;s 1937 shrimp boat, also survived with minor damage to her topsides. The modern 48-foot, aluminum catamaran used for harbor tours and education programs also appears to have survived with just minor damage. She rode out the storm in her slip. When the 12foot storm surge subsided, the port hull Elissa after

fetched up on the finger pier.&quot; Elissa reopened to the public on 24 October. A major factor in the ship&#39;s ability to ride out Ike, the third most destructive hurricane to ever hit the US, was that her mooring was designed with dolphins strong enough and tall enough to be a hurricane berth. Back in the early 1980s when she was being restored, those then in charge had the fore-