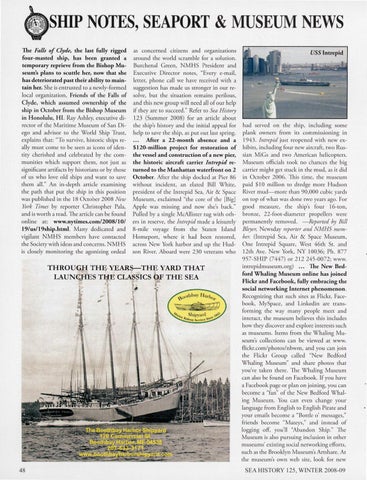 9sHIP NOTES, SEAPORT &amp; MUSEUM NEWS The Falls of Clyde, the last fully rigged as concerned citizens and organizations four-masted ship, has been granted a aro und the wo rld scramble for a solurion. temporary reprieve from the Bishop Mu- Burchenal G reen, NMHS Pres ident and seum&#39;s plans to scuttle her, now that she Executive Direcror notes, &quot;Every e-mail, has deteriorated past their ability to main- letter, phone call we have received with a tain her. She is entrusted ro a newly-fo rmed suggestion has made us stronger in our relocal organ ization, Friends of the Falls of solve, but the situation remains perilous, Clyde, which assumed ownership of the and this new gro up will need all of our help ship in October from the Bishop Museum if they are ro succeed.&quot; Refer ro Sea H istory in Honolulu, HI. Ray Ashley, executive di- 123 (Summer 2008) for an article about recror of the Maritime Museum of San Di- the ship&#39;s hisrory and the initial appeal for ego and adviso r ro the World Ship Trust, help to save the ship, as put out last spring. explains that: &quot;To survive, hisro ric ships reAfter a 22-month absence and a ally must come ro be seen as icons of iden- $120-million project for restoration of tity cherished and celebrated by the com- the vessel and construction of a new pier, munities whi ch support them , not just as the historic aircraft carrier Intrepid resignificant artifacts by hisrorians or by those turned to the Manhattan waterfront on 2 of us who love old ships and want ro save October. After rhe ship docked at Pier 86 them all.&quot; An in-depth article examining without incident, an elated Bill White, the path that put the ship in this position president of the Intrepid Sea, Air &amp; Space was published in the 18 Ocrober 2008 New Museum, exclaimed &quot;the core of the [Bi g] York Times by reporter C hrisropher Pala, Apple was missing and now she&#39;s back.&quot; and is worth a read. The article can be found Pulled by a single McAllister tug with othonline at: www.nytimes.com/2008/10/ ers in reserve, the Intrepid made a leisurely 19/us/19ship.html. Many dedicated and 8-mile voyage from the Staten Island vigi lant NMHS members have contacted Homeporr, where ir had been resrored, the Society with ideas and concerns. NMHS across New York harbo r and up the Hudis closely moniroring the ago nizing ordeal son River. Aboard we re 230 veterans who

had served on the ship, includin g some plank owners from its commissioning in 1943 . Intrepid just reopened wirh new exhibits, including fo ur new aircraft, rwo Russian MiGs and rwo American helicopters . Museum officials rook no chances the big carrier might get stuck in rhe mud, as it did in Ocrober 2006. This time, the museum paid $ 10 million ro dredge more Hudso n River mud- more than 90,000 cubic yards on rap of what was done rwo years ago. For good measure, the ship&#39;s four 16-ron, bronze, 22-foo t-diameter propellers were permanently removed. - Reported by Bill Bleyer, Newsday reporter and NMHS member. (Intrepid Sea, Air &amp; Space Museum, One Intrepid Square, West 46 th St. and 12th Ave. New York, NY 10036; Ph. 877 957-SHIP (7447) or 2 12 245-0072 ; www. intrepidmuseum. org) . .â&amp;#x20AC;˘ The New Bedford Whaling Museum online has joined Flickr and Facebook, fully embracing the social networking Internet phenomenon. Recognizing that such sires as Flickr, Facebook, MySpace, and Linkedin are transfo rming rhe way many people meet and interact, the museum believes this includes how they discover and explore interests such as museums. Irems from rhe Whaling Museum&#39;s collections can be viewed ar www. Ai ckr.com/phoros/nbwm, and you can join the Flickr Gro up called &quot;New Bedford W haling Museum&quot; and share phoros that yo u&#39;ve taken rhere. The Whaling Museum can also be found on Facebook. If yo u have a Facebook page or plan on joining, yo u can become a &quot;fan&quot; of the New Bedford Whaling Museum. You can even change yo ur language from English ro English Pirate and yo ur emails beco me a &quot;Bottle o&#39; messages,&quot; fri ends become &quot;Mateys,&quot; and instead of logging off, yo u&#39;ll &quot;Abandon Ship .&quot; The Museum is also pursuing inclusion in other museums&#39; existing social nerworking effo rts, such as the Brooklyn Museum&#39;s Arrshare. Ar the museum&#39;s own web site, look for new SEA HISTORY 125 , WINTER 2008-09