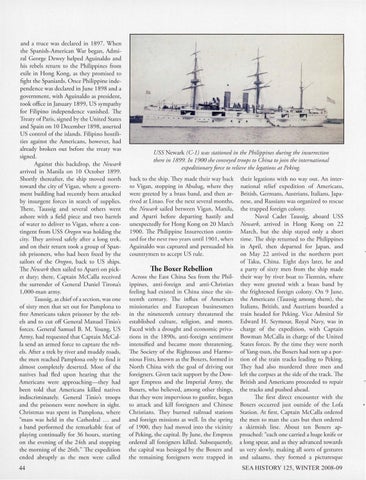 and a truce was declared in 1897. When the Spanish-American War began , Admiral George D ewey helped Aguinaldo and his rebels return to the Philippines from exile in Hong Kong, as they promised to fight the Spaniards. Once Philippine independence was declared in June 1898 and a government, with Aguinaldo as president, rook office in January 1899, US sympathy for Filipino independence vanished . 1he Treaty of Paris, signed by the United States and Spain on 10 D ecember 1898, asserted US co ntrol of the islands. Fi lipino hostilities against the Americans, however, had already broken out before the treaty was signed. Aga inst thi s backdrop, the Newark arrived in M anila on 10 October 1899. Shortly thereafter, the ship moved north toward the city ofVigan, where a government building had recently been attacked by insurgent forces in search of supplies. There, Tauss ig and several others went ashore with a field piece and two barrels of water to deliver to Vigan, where a co ntingent from USS Oregon was holdin g the city. They arrived safel y after a lo ng trek, and on their return rook a group of Spanish priso ners, who had been fre ed by the sailors of the Oregon, back to US ships. The Newark then sailed to Aparri on picket duty; there, Captain McCalla rece ived the surrender of General Daniel Tirona&#39;s 1,000-man army. Taussig, as chief of a section , was one of sixty men that set out for Pamplona to free Americans taken prisoner by the rebels and to cut off General Manuel Tinio&#39;s forces. General Samuel B. M. Young, US Army, had requested that Captain McCalla send an armed force to capture the rebels. After a trek by river and muddy roads, the men reached Pamplona only to find it almost comp letely deserted. Most of the natives had Aed upon hearing that th e Americans were approaching- th ey had been told that Americans killed natives indiscriminately. General T inio&#39;s troops and the priso ners we re nowhere in sight. C hristmas was spent in Pamplona, where &quot;mass was held in the Cathedral ... and a band performed the remarkable feat of playing continually for 36 hours, starting on the evening of the 24th and stopp ing th e morning of the 26th.&quot; The expedition ended ab ruptly as the men were called

USS Newark (C- 1) was stationed in the Philippines during the insurrection there in 1899. In 19 00 she conveyed troops to China to join the internatio nal expeditionary force to relieve the legations at Peking.

back to the ship. They m ade their way back to Vigan, stopping in Abulug, where they were greeted by a brass band, and then arrived at Linao. For th e next several months, the Newark sailed between Vigan, M anila, and Aparri befo re departing has tily and unexpectedly for Hong Kong on 20 March 1900. The Philippine In surrection co ntinued for the next two ye;irs unril 1901 , when Aguinaldo was captured and persuaded his co untrym en to accept US rule.

The Boxer Rebellion Across the East C hina Sea from the Philippines, anti-foreign and anti-Christian fee ling had ex isted in C hin a since the sixteenth century. The inAux of American mi ssionaries and European businessmen in the nineteenth century threatened the established culture, religion, and mores. Faced with a drought and eco nomic privations in the 1890s, anti-foreign sentiment intensified and became more threatening. The Society of the Ri ghteous and Harmonious Fists, known as the Boxers, fo rmed in North Chi na with the goal of driving out fo reigners. Given tacit support by th e Dowage r Empress and the Imperial Army, the Boxers, who believed, among other things, that they were impervious to gunfire, began to attack and kill foreigners and C hinese C hristians. They burned railroad stations and forei gn missions as well. In the spring of 1900, they had moved into the vicini ty of Peking, the capital. By June, the Empress ordered all foreigners killed. Subsequently, the capital was besieged by the Boxers and the remaining foreigners were trapped in

thei r legations with no way out. An international relief expedition of Americans, British, Germans, Austrians, Italians, Japanese, and Russians was organized to rescue th e trapped foreign colony. Naval Cadet Taussig, aboard USS Newark, arrived in Hong Kong on 22 March, but th e ship stayed only a short tim e. The ship returned to the Philippines in April, then departed for Japan, and on May 22 ar rived in the northern port of Taku, C hina. Eight days later, he and a parry of sixty men from the ship made their way by rive r boat to Tientsin, where they were greeted with a brass band by the frightened foreign colony. On 9 June, the Americans (Taussig among them), the Italians, British, and Austrians boarded a train headed for Peking. Vice Admiral Sir Edward H . Seymour, Royal Navy, was in charge of the expedition, with Captain Bowman McCalla in charge of the United States forces. By the time they were north ofYang-tsun , the Boxers had torn up a po rtion of the train tracks leading to Pekin g. They had also murdered three men and left the corpses at the side of the track. The British and Americans proceeded to repair the tracks and pushed ahead. The first direct encounter with th e Boxers occurred just outside of the Lofa Station. At first, Captain McCalla ordered the men to man the cars but then ordered a skirmish line. About ten Boxers approached: &quot;each one carried a huge knife or a long spear, and as they advanced towards us very slowly, making all sorts of gestures and salaams, they formed a picturesque