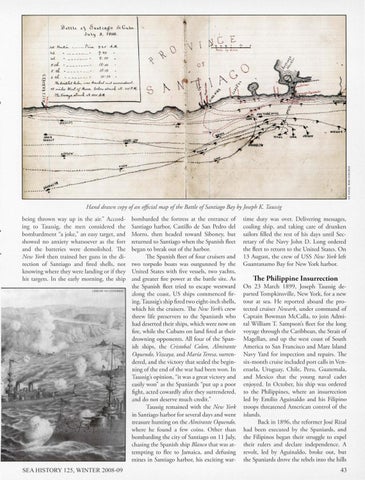 Hand drawn copy ofan official map ofthe Battle ofSantiago Bay by Joseph K Taussig being thrown way up in the air.&quot; According to Taussig, the men considered the bombardment &quot;a joke,&quot; an easy target, and showed no anxiety whatsoever as the fort and the batteries were demolished. The New York then uained her guns in the direction of Santiago and fired shells, not knowing where they were landing or if they hi t targets. In the early morning, the ship l.IB RA RY 0 1&#39; CONG RESS

bombarded the fortress at the entrance of Santiago harbor, Castillo de San Pedro de! Morro, then headed toward Siboney, but returned to Santiago when the Spanish fleet began to break out of the harbor. The Spanish fleet of four cruisers and two torpedo boats was outgunned by the United States with five vessels, two yachts, and greater fire power at the battle site. As the Spanish fleet tried to escape westward alo ng the coast, US ships commenced firing. Taussig&#39;s ship fired two eight-inch shells, which hit the cruisers. The New Yorks crew threw life preservers to the Spaniards who had deserted their ships, which were now on fire, whi le the C ubans o n land fired at their drowning opponents. Al l four of the Spanish ships, the Cristobal Colon, Almirante Oquendo, Vizcaya, and Maria Teresa, surrendered, and the victory that sealed the beginning of the end of the war had been won. In Taussig&#39;s opinion, &quot;it was a great vicrory and easily won&quot; as the Spa ni ards &quot;put up a poor fight, acted cowardly afrer they surrendered, and do not deserve much credit.&quot; Taussig remained with the New York in Samiago harbor for several days and went treasure hunting on the Almirante Oquendo, where he found a few coins. Other than bombarding the city of Santiago on 11 July, chasing the Spanish ship Blanco that was attempting ro flee to Jamaica, and defusing mines in Santiago harbor, his exciting war-

time duty was over. Delivering messages, coaling ship, and taking care of drunken sailors fill ed the rest of his days until Secretary of the Navy John D. Long ordered the fleet ro return to the U nited States. On 13 August, the crew of USS New York lefr G uamanamo Bay for New York harbor.

The Philippine Insurrection On 23 March 1899, Joseph Taussig departed Tompkinsville, New York, for a new tour at sea. He reported aboard the protected cruiser Newark, under command of Captain Bowman McCalla, to join Admiral William T. Sampson&#39;s Aeet for the lo ng voyage through the Caribbean , the Strait of Magellan, and up the west coast of South America to San Francisco and Mare Island Navy Yard for inspection and repairs. The six-month cruise included port calls in Venezuela, Uruguay, C hile, Peru, G uatemala, and Mexico that the young naval cadet enjoyed. In October, his ship was ordered to the Philippines, where an insurrection led by Emilio Aguinaldo and his Filipino troops threatened American control of the islands. Back in 1896, the reformer Jose Rizal had been executed by the Span iards, and the Filipinos began their stru ggle to expel their rulers and declare independence. A revolt, led by Aguinaldo, broke out, but the Spaniards drove the rebels into the hi lls