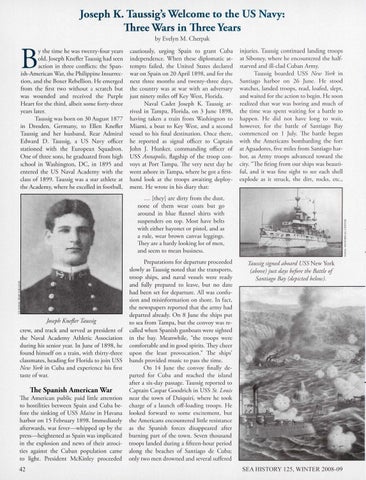 Joseph K. Taussig&#39;s Welcome to the US Navy: Three Wars in Three Years by Evelyn M . Cherpak y the time he was twenty-four years old, Joseph KneflerTaussig had seen action in three conflicts: the Spanish-American War, the Philippine Insurrection , and the Boxer Rebellion. He emerged from the first two without a scratch but was wounded and received the Purple Heart for the third, albeit some forty-three years later. Taussig was born on 30 August 1877 in Dresden , Germany, to Ellen Knefler Taussig and her husband, Rear Admiral Edward D. Taussig, a US Navy officer stationed with the European Squadron. One of three sons, he graduated from high school in Washington, D C, in 1895 and entered the US Naval Academy with the class of 1899. Taussig was a star athlete at the Academy, where he excelled in football,

cautiously, urging Spain to grant C uba independence. When these diplomatic attempts failed , the United States declared war on Spai n on 20 April 1898, and for the next three months and twenty-th ree days, the country was at war with an adversary just ninety miles off Key West, Florida. Naval Cadet Joseph K. Taussig arrived in Tampa, Florid a, on 3 June 1898, having taken a train from Washington to Miami, a boat to Key West, and a second vessel to his final destination . Once there, he reported as signal officer to Captain John J. Hunker, co mmanding officer of USS Annapolis, flags hip of the troop convoys at Port Tampa. The very next day he went ashore in Tampa, where he got a firsthand look at the troops awaiting deployment. H e wrote in his diary that:

injuri es. Taussig continued landing croops at Siboney, where he encountered the halfstarved and ill-clad Cuban Army. Taussig boarded USS New York in Santiago harbor on 26 June. He stood watches, landed troops, read, loafed, slept, and waited for the action to begin. He soon realized that war was boring and much of the time was spent waiting for a battle to happen. He did not have long to wait, however, for the battle of Santiago Bay commenced on 1 July. The battle began with the Americans bombarding the fort at Aguadores, five miles from Santiago harbor, as Army troops advanced toward the city. &quot;The firing from our ships was beautiful , and it was fine sight to see each shell explode as it struck, the dirt, rocks, etc.,

. .. [they] are dirty from the dust, none of them wear coats but go aro und in blue fl annel shirts with suspenders on rop. Most have belts with either bayonet or pistol, and as a rule, wear brown canvas leggings. They are a hardy looking lot of m en, and seem to mean business.

Joseph Knefler Taussig crew, and track and served as pres ident of the Naval Academy Athletic Association during his senior year. In June of 1898, he found himself on a train, with thirty-three class mates, heading for Florida to join USS New York in C uba and experience his first taste of war.

Tue Spanish American War The American public paid littl e attention to hostiliti es between Spain and Cuba before the sinking of USS Maine in H avana harbo r on 15 February 1898. Immediately afterwards, war fever-whipped up by the press-heightened as Spain was implicated in the explosion and news of their at rocities against the Cuban population cam e to light. President McKinley proceeded

Preparations fo r departure proceeded slowly as Taussig noted that the transports, troop ships, and naval vessels were ready and fully prepared to leave, but no date had been set for departure. All was confusion and misinformation on shore. In fact, the newspapers reported that the army had departed already. O n 8 June the ships put to sea from Tampa, but the convoy was recalled when Spanish gunboats were sighted in the bay. Meanwhile, &quot;the troops were com fo rtable and in good spirits. They cheer upon the least provocation.&quot; TI1e ships&#39; bands provided music to pass the time. On 14 June the convoy finall y departed for Cuba and reached the island afte r a six-day passage. Taussig reported to Captain Caspar Goodrich in USS St. Louis near the town of Daiquiri, where he took charge of a launch off-loading troops. He looked fo rward to some excitement, but the Americans enco untered little resistance as the Spanish forces disappeared after burning part of the town. Seven thousand troops landed during a fifteen-hour period along the beaches of Santiago de C uba; only two men drowned and several suffered

Taussig signed aboard USS New York (above) just days before the Battle of Santiago Bay (depicted below).