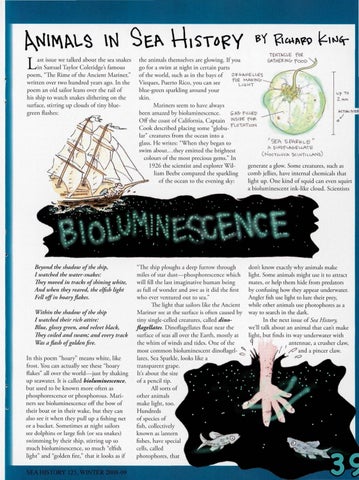 ast issue we talked about the sea snakes in Sam uel Taylor Coleridge's famous poem, "The Rime of the Ancient Mariner," written over two hundred years ago. In the poem an old sailor leans over the rail of his ship to watch snakes slithering o n the surface, stirring up clouds of tiny bluegreen Aas hes:

Beyond the shadow of the ship, I watched the water-snakes: They moved in tracks ofshining white, And when they reared, the elfish light Fell offin hoary flakes. Within the shadow of the ship I watched their rich attire: Blue, glossy green, and velvet black, They coiled and swam; and every track Was a flash ofgolden fire. In this poem "hoary" means white, like frost. You can actually see these "hoary Bakes" all over the wo rld-just by shaking up seawater. It is called bioluminescence, but used to be known more often as phosphorescence or phosphorous. Mariners see bioluminescence off the bow of their boat or in their wake, but they can also see it when they pull up a fishing net or a bucket. Sometimes at night sailors see dolphins or large fish (or sea snakes) swimming by their ship, stirring up so much bioluminescence, so much "elfish light" and "golden fire," that it looks as if

"The ship ploughs a deep furrow through miles of star dust-phosphorescence which will fill the last imaginative human being as full of wonder and awe as it did the first who ever ventured out to sea." The light that sailors like the Ancient Mariner see at the surface is often caused by tiny single-celled creatures, called dinoflagellates. DinoAage!lates Aoat near the surface of seas all over the Earth, mostly at the whim of wi nds and tides. One of the most common bioluminescenr dinoAagel- c::,. <:::... !ares, Sea Sparkle, looks like a transparent grape. Ir's about the size of a pencil tip. All sorts of o ther animals make ligh t, too. Hundreds of species of fish, collectively known as lanrern fis hes, have special cells, called photophores, that

don't know exactly why animals make ligh t. Some animals might use it to attract mates, or help them hide from predators by confusing how they appear underwater. Angler fish use light to lure their prey, while other animals use photophores as a way to search in the dark. In the next issue of Sea History, we'll talk about an animal that can't make light, but find s its way underwater with ~ anten nae, a crusher claw, / ,,(? and a pincer claw. ~

10 A Look Astern and the Course Ahead: A Conversation with Sir Robin Knox-Johnston, by Richard du Moulin • 14 Whaling Shipwrecks in the Nor...

10 A Look Astern and the Course Ahead: A Conversation with Sir Robin Knox-Johnston, by Richard du Moulin • 14 Whaling Shipwrecks in the Nor...