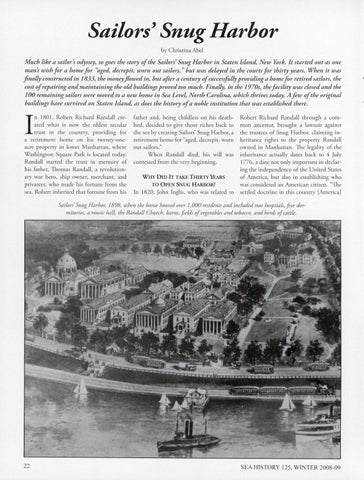 Much like a sailor&#39;s odyssey, so goes the story of the Sailors&#39; Snug Harbor in Staten Island, New York. It started out as one man&#39;s wish for a home for &quot;aged, decrepit, worn out sailors,&quot; but was delayed in the courts for thirty years. When it was finally constructed in 1833, the money flowed in, but after a century ofsuccessfully providing a home for retired sailors, the cost ofrepairing and maintaining the old buildings proved too much. Finally, in the 1970s, the facility was closed and the 100 remaining sailors were moved to a new home in Sea Level North Carolina, which thrives today. A few of the original buildings have survived on Staten Island, as does the history ofa noble institution that was established there. n 180 l , Robert Richard Randall created wh at is now the oldest secular trust in the country, providing for a retirement home on his twen ty-o neacre property in lower M anhattan , where Washington Square Park is located today. Randall started the trust in memory of his father, Thom as Randall, a revolutionary war hero, ship owner, merchant, and privateer, who made his fortune from the sea. Rob ert inherited that fortune from his

fath er and, being childless on his deathbed, decided to give those riches back to the sea by creating Sailors&#39; Snug H arbor, a rerirem enr home for &quot;aged, decrepit, worn out sailors.&quot; When Randall died, his will was contested from the ve ry beginning. WHY DID IT TAKE THIRTY YEARS TO OPEN SNUG HARBOR?

Robert Richard Randall through a common ancestor, brought a laws uit against the trustees of Snug Harbor, claiming inheritance rights to the proper ty Randall owned in M anhattan . The legality of the inheritance actually dates back to 4 July 1776, a date not only important in declaring the independence of the U nited States of America, bur also in establishing who was co nsidered an American citize n. &quot;The settled doctrine in this country [America]

Sailors&#39; Snug H arbor, 1898, when the home housed over 1, 000 residents and included two hosp itals, five do rmitories, a music hall, the Randall Church, barns, fields of vegetables and tobacco, and herds of cattle.