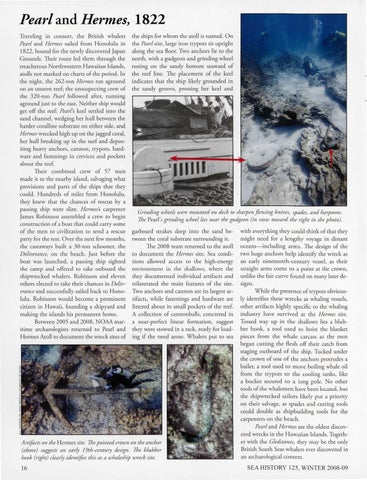 Pearl and Hermes, 1822 Traveling in consort, the British whalers Pearl and Hermes sailed from Honolulu in 1822, bound for the newly discovered Japan Grounds. Their route led them through the treacherous Northwestern H awaiian Islands, atolls not marked on charts of the period. In the night, the 262-ton Hermes ran aground on an unseen reef; the unsuspecting crew of the 320-ton Pearl followed after, running aground just to rhe east. Neither ship would get off the reef: Pearl &#39;s keel settled into the sand channel, wedging her hull between the harder coralline substrate on either side, and Hermes wrecked high up on the jagged coral, her hull breaking up in the surf and depositing heavy anchors, cannon, rrypots, hardware and fastenings in crevices and pockets about the reef. Their combined crew of 57 men made it to the nearby island, salvaging what provisions and parts of the ships rhar they could. Hundreds of miles from Honolulu, they knew that rhe chances of rescue by a passing ship were slim. Hermes&#39;s carpenter James Robinson assembled a crew to begin construction of a boar that could carry some of the men to civilization to send a rescue parry for rhe rest. Over the next few months, the castaways built a 30-ton schooner, the Deliverance, on the beach. Just before the boar was launched, a passing ship sighted the camp and offered to take onboard the shipwrecked whalers. Robinson and eleven others elected to rake their chances in D eliverance and successfully sailed back to Honolulu. Robinson wo uld become a prominent citizen in Hawaii, founding a shipyard and making the islands his permanent home. Between 2005 and 2008, NOAA maritime archaeologists returned to Pearl and Hermes Atoll to document the wreck sires of

the ships for whom the atoll is named. On the Pearl site, large iron trypots sit upright along the sea floor. Two anchors lie to the north, with a gudgeon and grinding wheel resting on the sandy bottom seaward of the reef line. The placement of the keel indicates that the ship likely grounded in the sandy groove, pressing her keel and

Grinding wheels were mounted on deck to sharpen flensing knives, spades, and harpoons. The Pearl&#39;s grinding wheel lies near the gudgeon (in view toward the right in the photo).

garboard snakes deep into the sand between the coral substrate surrounding it. The 2008 ream returned to the atoll to document the H ermes sire. Sea conditions allowed access to the high-energy environment in the shallows, where the they documented individual artifacts and rrilarerared the main features of the sire. Two anchors and cannon are its largest artifacts, while fastenings and hardware are littered about in small pockets of the reef. A collection of cannonballs, concreted in a near-perfect linear formation, suggest they were stowed in a rack, ready for loading if the need arose. Whalers put to sea

Artifacts on the H ermes site. The pointed crown on the anchor (above) suggests an early 19th-century design. The blubber hook (right) clearly identifies this as a whaleship wreck site.

with everything they could think of that they might need for a lengthy voyage in distant oceans-including arms. The design of the two huge anchors help identify the wreck as an early nineteenth-century vessel, as their straight arms come to a point at the crown, unlike the fair curve found on many later designs. While the presence of rrypors obviously identifies these wrecks as whaling vessels, other artifacts highly specific to the whaling industry have survived at the H ermes site. Tossed way up in the shallows lies a blubber hook, a tool used to hoist the blanker pieces from the whale carcass as the men began cutting the flesh off their catch from staging outboard of the ship. Tucked under the crown of one of the anchors protrudes a bailer, a tool used to move boiling whale oil from the rrypots to the cooling tanks, like a bucker secured to a long pole. No other tools of the whalemen have been located, but the shipwrecked sailors likely put a priority on their salvage, as spades and cutting tools could double as shipbuilding tools for the carpenters on the beach. Pearl and H ermes are the oldest discovered wrecks in the Hawaiian Islands. Together with the Gledstanes, they may be the only British South Seas whalers ever discovered in an archaeological context.