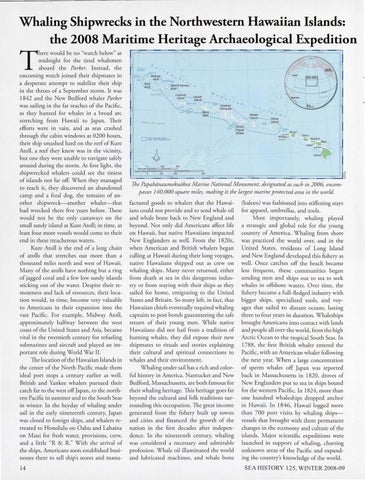 here wo uld be no &quot;watch below&quot; at midnight for the tired whalemen aboard the Parker. Instead, the oncoming watch joined their shipmates in a desperate attempt to stabilize their ship in the throes of a September storm . It was 1842 and the New Bedford whaler Parker was sailing in the far reaches of the Pacific, as they hunted for whales in a broad arc stretching from H awaii to Japan. Their efforts were in vain, and as seas crashed through the cabin windows at 0200 hours, their ship smashed hard on the reef of Kure Atoll, a reef they knew was in the vicinity, but one they were unable to navigate safely around during the srorm . At first light, the shipwrecked whalers could see the tiniest of islands not far off. When they managed to reach it, they discovered an abandoned camp and a feral dog, the remains of another shipwreck-another whaler-that had wrecked there five years before. These would not be the only castaways on the small sandy island at Kure Atoll; in time, at least four more vessels would come to their end in these treacherous waters. Kure Atoll is the end of a long chain of atolls that stretches out more than a thousand miles north and west of H awaii. Many of the atolls have nothing but a ring of jagged coral and a few low sandy islands sticking out of the water. Despite their remoteness and lack of resources, their location would, in time, become very val uable to Americans in their expansion into the vas t Pacific. For example, Midway Atoll, approximately halfway between the west coast of the United States and Asia, became vital in the twentieth century for refueling submarines and aircraft and played an important role during World War II. The location of the Hawaiian Islands in the center of the North Pacific made them ideal port stops a century earlier as well. British and Yankee whalers pursued their catch far to the west off Japan, to the northern Pacific in summer and to the South Seas in winter. In the heyday of whaling under sail in the early nineteenth century, Japan was closed to foreign ships, and whalers retreated to Honolulu on Oahu and Lahaina on Maui for fresh water, provisions, crew, and a little &quot;R &amp; R.&quot; With the arrival of the ships, Americans soon established businesses there to sell sh ip&#39;s stores and manu-

The Papahdnaumokudkea Marine National Monument, designated as such in 2006, encompasses 140, 000 square miles, making it the largest marine protected area in the world.

factured goods to whalers that the Hawaiians could not provide and to send whale oil and whale bone back to New England and beyond. Not only did Americans affect life on Hawaii, bur native Hawaiians impacted New Englanders as well. From the 1820s, when American and British whalers began calling at Hawaii during their long voyages, native H awaiians shipped out as crew on whaling ships. Many never returned, either from death at sea in this dangerous industry or from staying with their ships as they sailed fo r home, emigrating to the United States and Britain. So many left, in fac t, that H awaiian chiefs eventually required whaling captains to post bonds guaranteeing the safe return of their young men. While native H awaiians did not hail from a tradition of hunting whales, they did expose their new shipmates to rituals and stories explai ning their cultural and spiritual connections to w hales and their environment. W haling under sail has a rich and colorful history in America. Nantucket and New Bedford, Massachusetts, are both famous for their whaling heritage. This heritage goes far beyond the cultural and fo lk traditions surrounding this occupation. The great income generated from the fishery built up towns and cities and financed the growth of the nation in the first decades after independence. In the nineteenth century, whaling was considered a necessary and admirable profession. Whale oil illuminated the world and lubricated machines, and whale bone

(baleen) was fashioned into stiffening stays for apparel, umbrellas, and tools. Most importantly, whali ng played a strategic and global role for the young country of America. Whaling from shore was practiced the world over, and in the United States, residents of Long Island and New England developed this fishery as well. Once catches off the beach became less frequent, these communities began sending men and ships out to sea to seek whales in offshore waters. Over time, the fishery became a full-fledged industry with bigger ships, specialized tools, and voyages that sailed to distant oceans, lasting three to fo ur years in duration. Whaleships brought Americans into contact with lands and people all over the world, from the high Arctic Ocean to the tro pical South Seas. In 1788, the first British whaler entered the Pacific, wi th an American whaler following the next year. When a large concentratio n of sperm whales off Japan was reported back in Massachusetts in 1820, droves of New Englanders put to sea in ships bound for the western Pacific. In 1824, more than one hundred whaleships dropped anchor in Hawaii . In 1846, Hawaii Jogged more than 700 port visits by whaling shipsvessels that brought with them permanent changes in the econ omy and culture of the islands. Major scientific expeditions were launched in support of whaling, charting unknown areas of the Pacific and expanding the country&#39;s knowledge of the world.