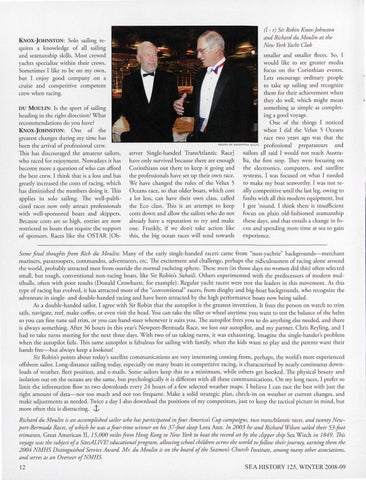 KNOX-JOHNSTON: Solo sailing requires a knowledge of all sailing and seamanship skills. Most crewed yachts specialize within their crews. Sometimes I like to be on my own, but I enjoy good company on a cruise and competi tive competent crew when racing. DU MOULIN : Is the sport of sailing

heading in the right direction? What recommendations do you have? KNOX-JOHNSTON: One of the greatest changes during my rime has been the arrival of professional crew. This has discouraged the amateur sailors, who raced for enjoymen t. Nowadays it has becom e more a question of who can afford the best crew. I think that is a loss and has greatly increased the costs of racing, which has diminished the numbers doing it. This applies in so lo sailing. The well-publicized races now only attract professionals with well-sponsored boats and skippers. Because costs are so high, entries are now restricted to boats that require the support of sponsors. Races like the OSTAR [Ob-

(l - r) Sir Robin Knox-Johnston and Richard du Moulin at the New York Yacht Club smaller and smaller fleets. So, I would like to see greater media focus o n the Corinthian events . Lets encourage ordinary people to take up sailing and recognize them for their achievement wh en they do well, which might m ean something as simple as completing a good voyage. One of the things I noticed when I did the Velux 5 Oceans race two years ago was that the rHoT o sv SAM ANTH A A LLEN professional preparateurs and server Single-handed TransArlantic Race] sailors all said I wo uld not reach Ausrrahave o nly survived because there are enough lia, the first stop. They were focus ing o n Corinthians out there to keep it going and the electronics, computers, and satellite the professionals have set up their own race. systems. I was focused on what I needed We have changed the rules of the Velux 5 to make my boat seaworthy. I was not reOceans race, so that older boats, which cost ally competitive until the last leg, owing to a lot less, can have their own class, called fa ults with all this modern equipment, but the Eco class . This is an anempt to keep I got &#39;round. I think there is insufficient costs down and allow the sailors who do not focus on plain old-fashioned seamanship already have a reputation to try and make these days, and that entails a change in foone. Frankly, if we don&#39;t rake action like cus and spending more rime at sea to gain this, the big ocean races will tend towards experience.

Some final thoughts from Rich du Moulin: Many of the early single-handed racers cam e from &quot;non-yachtie&quot; backgrounds-merchant mariners, paratroopers, commandos, adventurers, etc. The excitement and challenge, perhaps the ridiculousness of racing alone around the wo rld, probably attracted men from outside the normal yachting sphere. These men (in those days no women did this) often selected small, but rough, co nventional non-racing boats, like Sir Robin&#39;s Suhaili. Others experimented w ith the predecessors of modern multihulls, often with poor res ults (Donald Crowhurst, fo r example). Regular yacht racers were not the leaders in this movement. As this type of racing has evolved, it has attracted more of the &quot;conventional&quot; racers, from dinghy and big-boat backgrounds, who recognize the adventure in single- and double-handed racing and have been attracted by the high performance boats now being sailed. As a double-handed sailor, I agree wi th Sir Robin that the autopilot is the greatest inventio n . Ir frees the person on watch to trim sails, navigate, reef, make co ffee, or even visit the head. You can take the tiller or wheel anytime yo u want to test the balance of the helm so you can fine tune sail trim, or you can hand-steer whenever it suits yo u. The autopilot frees yo u to do anything else needed, and there is always som ething. After 36 hours in this year&#39;s Newport-Bermuda Race, we lost our autopilot, and my partner, Chris Reyling, and I had to rake turns steering for the next three days. W ith two of us taking turns, it was exhausting. Imagine the single-hander&#39;s problem when the auto pilot fails. This sam e autopilot is fabulous for sailing with fami ly, when the kids want to play and the parents want their hands free-but always keep a looko ut! Sir Robin&#39;s points about today&#39;s satellite communications are very interesting coming from, perhaps, the world&#39;s most experienced offshore sailor. Long-distance sailing today, especially on m any boats in competitive racing, is characterized by nearly continuous downloads of weather, fleet position, and e-mails. Some sailors keep this to a minimum, while others get hooked. The physical beauty and isolation out on the oceans are the same, but psychologically it is different with all these communications . On my long races, I prefer to limit the information flow to two downloads every 24 hours of a few selected weather m aps. I believe I can race the best with just the right amount of data-not too much and not too frequent. Make a solid strategic plan , check-in on weather or current changes, and make adjustments as needed. Twice a day I also download the positions of my competitors, just to keep the tactical picture in mind, but more often this is distracting. J,

Richard du Moulin is an accomplished sailor who has participated in four America&#39;s Cup campaigns, two transAtlantic races, and twenty Newport-Bermuda Races, of which he was a four-time winner on his 37joot sloop Lora Ann. In 2003 he and Richard Wilson sailed their 53-foot trimaran, Great American II, 15, 000 miles from Hong Kong to New York to beat the record set by the clipper ship Sea Wirch in 1849. This voyage was the subject ofa SitesALIVE! educational program, allowing school children across the world to follow their journey, earning them the 2004 NMHS Distinguished Service Award. Mr. du Moulin is on the board of the Seamen&#39;s Church Institute, among many other associations, and serves as an Overseer ofNMHS. 12