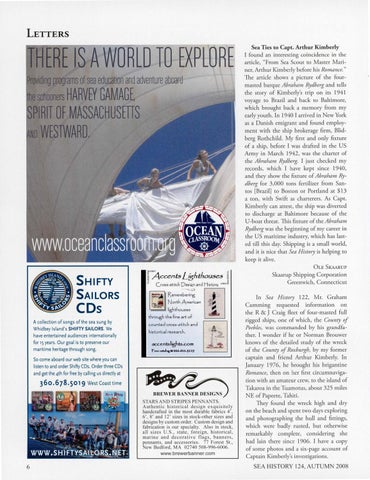 ERE IS AWORLD TO EXPLORE

Sea Ties to Capt. Arthur Kimberly I found an inreresting coincidence in the article, &quot;From Sea Scout to Master Mariner, Arthur Kimberly before his Romance. &quot; The article shows a picture of the fourmasted barque Abraham Rydberg and tells the story of Kimberly&#39;s trip on its 1941 voyage to Brazil and back to Baltimore, which brought back a memory from my early youth. In 1940 I arrived in New York as a Danish emigranr and found employment with the ship brokerage firm, Blidberg Rothchild. My first and only fixture of a ship, before I was drafted in the US Army in March 1942, was the charter of the Abraham Rydberg. I just checked my records, which I have kept since 1940, and they show the fixture of Abraham Rydberg for 3,000 tons fertilizer from Santos [Brazil) to Boston or Portland at $13 a ton, with Swift as charterers. As Capt. Kimberly can attest, the ship was diverted to discharge at Baltimore because of the U-boat threat. This fixture of the Abraham Rydberg was the beginning of my career in the US maritime industry, which has lasted till this day. Shipping is a small world, and it is nice that Sea History is helping to keep it alive. OLE SKAARUP

CDs A collection of songs of the sea sung by Whidbey Island &#39;s SHIFTY SAILORS. We have entertained audiences internationally for 15 years. Our goal is to preserve our maritime heritage through song.

lighthouses through the fine art of counted cross-stitch and historical research.

So come aboard our web site where you can listen to and order Shifty CDs. Order three CDs and get the 4th for free by calling us directly at

In Sea History 122, Mr. Graham Cumming requested information on the R &amp; J Craig fleet of four-masted full rigged ships, one of which, the County of Peebles, was commanded by his grandfather. I wonder if he or Norman Brouwer knows of the detailed study of the wreck of the County of Roxburgh, by my former captain and friend Arthur Kimberly. In January 1976, he brought his brigantine Romance, then on her first circumnavigation with an amateur crew, to the island of Takaroa in the Tuamotus, about 325 miles NE of Papeete, Tahiti. They found the wreck high and dry on the beach and spent two days exploring and photographing the hull and fittings, which were badly rusted, but otherwise remarkably complete, considering she had lain there since 1906. I have a copy of some photos and a six-page account of Captain Kimberly&#39;s investigations. SEA HISTORY 124, AUTUMN 2008