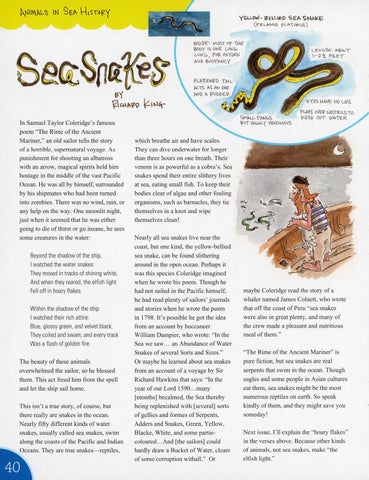 poem &quot;The Rime of the Ancient Mariner,&quot; an old sailor tells the story of a horrible, supernatural voyage. As punishment for shooting an albatross with an arrow, magical spirits held him hostage in the middle of the vast Pacific

which breathe air and have scales. They can dive underwater for longer than three hours on one breath. Their venom is as powerful as a cobra &#39; s. Sea snakes spend their entire slithery lives

Ocean. He was all by himself, surrounded

at sea, eating small fish. To keep their bodies clear of algae and other fouling

by his shipmates who had been turned into zombies. There was no wind, rain, or any help on the way. One moonlit night, just when it seemed that he was either

going to die of thirst or go insane, he sees some creatures in the water:

Nearly all sea snakes live near the coast, but one kind, the yellow-bellied

Beyond the shadow of the ship, I watched the water snakes: They moved in tracks of shining white, And when they reared, the elfish light Fell off in hoary flakes.

sea snake, can be found slithering around in the open ocean. Perhaps it was this species Coleridge imagined when he wrote his poem. Though he had not sailed in the Pacific himself, he had read plenty of sailors&#39; journals

Within the shadow of the ship I watched their rich attire: Blue. glossy green, and velvet black, They coiled and swam; and every track Was a flash of golden fire.

maybe Coleridge read the story of a whaler named James Colnett, who wrote that off the coast of Peru &quot;sea snakes

and stories when he wrote the poem in 1798. It&#39;s possible he got the idea from an account by buccaneer William Dampier, who wrote: &quot;In the Sea we saw . .. an Abundance of Water

were also in great plenty, and many of the crew made a pleasant and nutritious meal of them.&quot;

Snakes of several Sorts and Sizes.&quot;

&quot;The Rime of the Ancient Mariner&quot; is

The beauty of these animals

Or maybe he learned about sea snakes

overwhelmed the sailor, so he blessed

serpents that swim in the ocean. Though

them. This act freed him from the spell and Jet the ship sail home.

Richard Hawkins that says: &quot;In the

eagles and some people in Asian cultures eat them, sea snakes might be the most

This isn&#39;t a true story, of course, but there really are snakes in the ocean. Nearly fifty different kinds of water snakes, usually called sea snakes, swim along the coasts of the Pacific and Indian

year of our Lord 1590 ... many [months] becalmed, the Sea thereby being replenished with [several] sorts

numerous reptiles on earth. So speak kindly of them, and they might save you

of gellies and formes of Serpents,

Adders and Snakes, Green, Yellow, Blacke, White, and some partiecoloured ... And [the sailors] could hardly draw a Bucket of Water, cleare of some corruption withall.&quot; Or

Next issue, I&#39;ll explain the &quot;hoary flakes &quot; in the verses above. Because other kinds of animals, not sea snakes, make &quot;the elfish light.&quot;