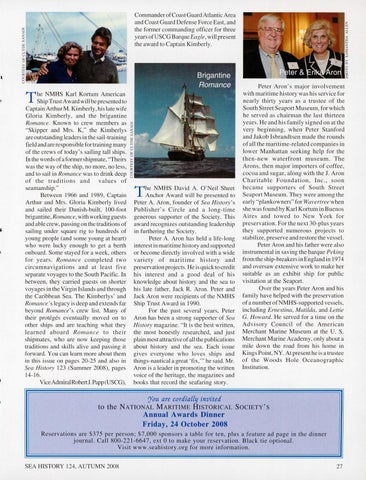 he NMHS Karl Ko1tum American Ship Trust A ward will be presented to Captain Arthur M. Kimberly, his late wife Gloria Kimberl y, and the brigantine Romance. Known to crew members as &quot;Skipper and Mrs. K,&quot; the Kimberlys are outstanding leaders in the sail-training field and are responsible for training many of the crews of today &#39; s sailing tall ships. In the words of a former shipmate, &quot;Theirs was the way of the ship, no more, no less , and to sai l in Romance was to drink deep of the traditions and values of seamanship. &quot; Between 1966 and 1989, Captain Arthur and Mrs. Gloria Kimberly lived and sailed their Danish-built, 100-foot brigantine, Romance, with working guests and able crew, passing on the traditions of sailing under square rig to hundreds of young people (and some young at heart) who were lucky enough to get a berth onboard. Some stayed for a week, others for years. Romance completed two circumnavigations and at least five separate voyages to the South Pacific. In between, they carried guests on shorter voyages in the Virgin Islands and through the Caribbean Sea. The Kimberlys&#39; and Romance&#39;s legacy is deep and extends far beyond Romance&#39;s crew list. Many of their proteges eventually moved on to other ships and are teaching what they le arn ed aboard Romance to their shipmates, who are now keeping those traditions and skills alive and passing it forward. You can learn more about them in this issue on pages 20-25 and also in Sea History 123 (Summer 2008), pages 14-16. Vice AdmiralRobertJ. Papp (USCG),

he NMHS David A. O&#39;Neil Sheet Anchor A ward will be presented to Peter A. Aron, founder of Sea History&#39;s Publi sher &#39;s Circle and a lon g-time generous supp01ter of the Society. Thi s award recognizes outstanding leadership in furtherin g the Society. Peter A. Aron has held a life-long interest in maritime history and supported or become directly involved with a wide variety of maritime hi story and preservation projects. He is quick to credit hi s interest and a good deal of hi s knowledge about history and the sea to hi s late father, Jack R. Aron. Peter and Jack Aron were recipients of the NMHS Ship Trust Award in 1990. For the past several years, Peter Aron has been a strong supp01ter of Sea History magazine. &quot; It is the best written, the most honestly researched , and just plain mostattractiveof all the publications about history and the sea. Each issue gives everyone who lo ves ships and things-nautical a great &#39;fi x,&quot;&#39; he said. Mr. Aron is a leader in promoting the written voice of the heritage, the magazines and books that record the seafaring story.

Peter Aron&#39;s major involvement with maritime history was his service for nearly thirty years as a trustee of the South Street Seaport Mu seum , for which he served as chairman the last thirteen years. He and hi s family signed on at the very beginning, when Peter Stanford and Jakob Isbrandtsen made the rounds of all the maritime-related companies in lower Manhattan seeking help for the then-n ew waterfront museum. The Arons , then major importers of coffee, cocoa and sugar, along with the J. Aron Charitable Foundation, Inc ., soo n became supporters of South Street Seaport Mu seum. They were among the early &quot;plankowners&quot; for Wavertree when she was found by Karl Kortum in Buenos Aires and towed to New York for preservation. For the next 30-plus years they supported numerous projects to stabili ze, preserve and restore the vessel. Peter Aron and his father were also instrumental in saving the barque Peking from the ship-breakers in England in 197 4 and oversaw extensive work to make her suitable as an exhibit ship for public visitation at the Seaport. Over the years Peter Aron and hi s family have helped with the preservation of a number ofNMHS-supported vessels, including Ernestina, Matilda , and Lettie G. Howard. He served for a time on the Advisory Council of the American Merchant Marine Museum at the U. S. Merchant Marine Academy, only about a mile down the road from hi s home in Kings Point, NY. At present he is a trustee of the Wood s Hole Ocean ograp hic Institution.