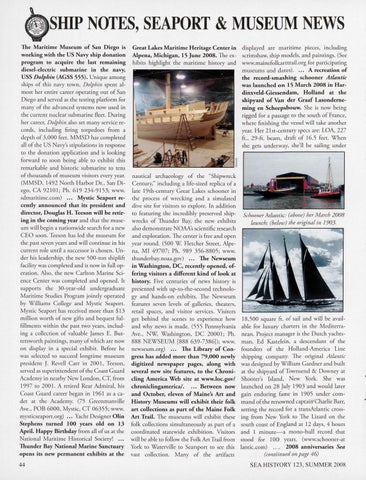 OsHIP NOTES, SEAPORT &amp;MUSEUM NEWS The Maritime Museum of San Diego is working with the US Navy ship donation program to acquire the last remaining diesel-electric submarine in the navy, USS Dolphin (AGSS 555). Unique among ships of this navy town, Dolphin spent almost her entire career operating out of San Diego and served as the testing platform for many of the advanced systems now used in the current nuclear submarine fleet. During her career, Dolphin also set many service records, including firing torpedoes from a depth of3,000 feet. MMSD has completed all of the US Navy&#39;s stipulations in response to the donation application and is looking forward to soo n being able to exhibit this remarkable and historic submarine to tens of thousands of museum visitors every year. (MMSD, 1492 North Harbor Dr. , San Diego, CA 92101; Ph. 619 234-9153; www. sdmaritime.com) ... Mystic Seaport recently announced that its president and director, Douglas H. Teeson will be retiring in the coming year and that the museum will begin a nationwide search for a new CEO soon. Teeson has led the museum for the past seven years and will continue in his current role until a successo r is chosen. Under his leadership, the new 500-ton sh iplift facility was completed and is now in full operation. Also, the new Carlton Marine Science Center was completed and opened. It supports the 30-year-old undergraduate Maritime Studies Program jointly operated by Williams College and Mystic Seaport. Mystic Seaport has received more than $ 13 million worth of new gifts and bequest fulfillments within the past two years, including a collection of valuable James E. Buttersworth paintings, many of which are now on display in a special exhibit. Before he was selected to succeed longtime museum president J. Revell Carr in 200 1, Teeson, served as superintendent of the Coast G uard Academy in nearby New London, CT, from 1997 to 2001. A retired Rear Admiral, his Coast Guard career began in 1961 as a cadet at the Academy. (75 Greenmanville Ave., POB 6000, Mystic, CT 06355; www. mysricseaport.org) ... Yacht Designer Olin Stephens turned 100 years old on 13 April. Happy Birthday from all of us at the National Maritime Historical Society! ... Thunder Bay National Marine Sanctuary opens its new permanent exhibits at the

Great Lakes Maritime Heritage Center in displayed are maritime pieces, including Alpena, Michigan, 15 June 2008. The ex- scrimshaw, ship models, and paintings. (See hibits highlight the maritime history and www.mainefolkarttrail.org for participating museums and dares). . .. A recreation of the record-smashing schooner Atlantic was launched on 15 March 2008 in Hardinxveld-Giessendam, Holland at the shipyard of Van der Graaf Lasonderneming en Scheepsbouw. She is now being rigged for a passage to the south of France, where finishing the vessel will take another year. Her 21st-century specs are: LOA, 227 ft., 29-ft. beam, draft of 16.5 feet. When she gets underway, she&#39;ll be sailing under

nautical archaeology of the &quot;Shipwreck Century,&quot; including a life-sized replica of a late 19th-century Great Lakes schooner in the process of wrecking and a simulated dive site for visitors to explore. In addition to featuring the incredibly preserved shipwrecks of Thunder Bay, the new exhibits also demonstrate NOAA&#39;s scientific research and exploration . The center is free and open year round. (5 00 W Fletcher Street, Alpena, MI 49707; Ph. 989 356-8805; www. rhunderbay.noaa.gov) ... The Newseum in Washington, DC, recently opened, offering visitors a different kind of look at history. Five centuries of news history is presented with up-to-the-second technology and hands-on exhibits. The Newseum features seven levels of galleries, theaters, retail spaces, and visitor services. Visitors get behind the scenes to experience how and why news is made. (555 Pennsylvania Ave., NW, Washington, DC 20001; Ph. 888 NEWSEUM [888 639-7386]); www. newseum.org) . . . The Library of Congress has added more than 79,000 newly digitized newspaper pages, along with several new site features, to the Chronicling America Web site at www.loc.gov/ chroniclingamerica/. . .. Between now and October, eleven of Maine&#39;s Art and History Museums will exhibit their folk art collections as part of the Maine Folk Art Trail. The museums will exhibit these folk collections simultaneously as part of a coordinated statewide exhibition. Visitors will be able to follow the Folk Art Trail from York to Waterville to Searsport to see this vast collection. Many of the artifacts

18,500 square ft. of sail and will be available for luxury charters in the Mediterranean. Project manager is the Durch yachtsman, Ed Kasrelein, a descendant of the founders of the Holland-America Line shipping company. The original Atlantic was designed by William Gardner and built at the shipyard of Townsend &amp; Downey at Shooter&#39;s Island, New York. She was launched on 28 July 1903 and would later gain enduring fame in 1905 under command of the renowned captain&#39;-Charlie Barr, setting the record for a transArlanric crossing from New York to The Lizard on the south coast of England at 12 days, 4 hours and 1 minute-a mono-hull record that stood for 1OOJ years. (www.schooner-at !antic. com) . . .. 2008 anniversaries Sea (contiinued on page 46) SEA HISTWRY 123 , SUMMER 2008