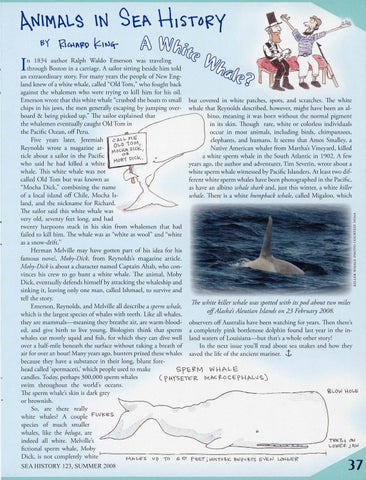 n 1834 author Ralph Waldo Emerson was traveling {kl /J through Boston in a carriage. A sailor sitting beside him told an extraordinary story. For many years the people of New Engv ~(!&gt; 5) land knew of a white whale, called &quot;Old Tom,&quot; who fought back (:{&#39; against the whalemen who were trying to kill him for his oil. Emerson wrote that this white whale &quot;crushed the boats to small bur covered in white patches, spots, and scratches. The white chips in his jaws, the men generally escaping by jumping over- whale that Reynolds described, however, might have been an alboard &amp; being picked up.&quot; The sailor explained that bino, meaning it was born without the normal pigment the whalemen eventually caught Old Tom in in its skin. Though rare, white or colorless individuals the Pacific Ocean, off Peru. occur in most animals, including birds, chimpanzees, Five years later, Jeremiah elephants, and humans. It seems that Amos Smalley, a Reynolds wrote a magazine arNative American whaler from Martha&#39;s Vineyard, killed ticle about a sailor in the Pacific a white sperm whale in the South Atlantic in 1902. A few who said he had killed a white years ago, the author and adventurer, Tim Severin, wrote about a whale. This white whale was not white sperm whale witnessed by Pacific Islanders. At least two difcalled Old Tom but was known as ferent white sperm whales have been photographed in the Pacific, &quot;Mocha Dick,&quot; combining the name as have an albino whale shark and, just this winter, a white killer of a local island off Chile, Mocha Iswhale. There is a white humpback whale, called Migaloo, which land, and the nickname for Richard. The sailor said this white whale was very old, seventy feet long, and had twenty harpoons stuck in his skin from whalemen that had failed to kill him. The whale was as &quot;white as wool&quot; and &quot;white as a snow-drift.&quot; Herman Melville may have gotten part of his idea for his famous novel, Moby-Dick, from Reynolds&#39;s magazine article. Moby-Dick is about a character named Captain Ahab, who convinces his crew to go hunt a white whale. The animal, Moby Dick, eventually defends himself by attacking the whaleship and sinking it, leaving only one man, called Ishmael, to survive and tell the story. The white killer whale was spotted with its pod about two miles Emerson, Reynolds, and Melville all describe a sperm whale, offAlaska&#39;s Aleutian Islands on 23 February 2008. which is the largest species of whales with teeth. Like all whales, they are mammals-meaning they breathe air, are warm-blood- observers off Australia have been watching for years. Then there&#39;s ed, and give birth to live young. Biologists think that sperm a completely pink bottlenose dolphin found last year in the inwhales eat mostly squid and Esh, for which they can dive well land waters of Louisiana-but that&#39;s a whole other story! over a half-mile beneath the surface without taking a breath of In the next issue you&#39;ll read about sea snakes and how they air for over an hour! Many years ago, hunters prized these whales saved the life of the ancient mariner. i, because they have a substance in their long, blunt forehead called &#39;spermaceti,&#39; which people used to make sps?M V·H -\-AL2 candles. Today, perhaps 300,000 sperm whales ( \&#39;t\YSETt:=~ tv\~c:.~oC€f\-4,0-LiJS.j swim throughout the world&#39;s oceans. The sperm whale&#39;s skin is dark grey or brownish. So, are there really white whales? A couple FL\J f:cS species of much smaller whales, like the beluga, are indeed all white. Melville&#39;s fictional sperm whale, Moby Dkk, ~ notcompl~ely~ire 1 -~-------·----------------~-~--~~~~ fv&#39;\h\..-cS Vi&#39; TCl 6 0 r ee.T; l-\\&lt;;\O~ \C. ~\&gt;O~&#39;fS i;;·ve:r-J l.A&#39;.lllE:,61&lt;? SEA HISTORY 123, SUMMER 2008