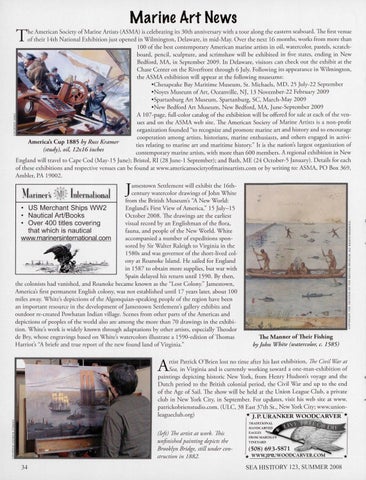 he American Society of Marine Artists (ASMA) is celebrating its 30th anniversary with a tour along the eastern seaboard. The first venue of their 14th National Exhibition just opened in Wilmington, Delaware, in mid-May. Over the next 16 months, works from more than 100 of the best contemporary American marine artists in oil, watercolor, pastels, scrarchboard, pencil, sculpture, and scrimshaw will be exhibited in five states, ending in New Bedford, MA, in September 2009. In Delaware, visitors can check our the exhibit at the Chase Center on rhe Riverfront through 6 July. Following its appearance in Wilmington, the ASMA exhibition will appear at the following museums: •Chesapeake Bay Maritime Museum, Sr. Michaels, MD, 25 July-22 September •Noyes Museum of Arr, Oceanville, NJ, 13 November-22 February 2009 •Spartanburg Arr Museum, Spartanburg, SC, March-May 2009 •New Bedford Arr Museum, New Bedford, MA, J une-Seprember 2009 A 107-page, full-color catalog of the exhibition will be offered for sale at each of the venues and on the ASMA web sire. The American Society of Marine Artists is a non-profit organization founded "to recognize and promote marine art and history and to encourage cooperation among artists, historians, marine enthusiasts, and others engaged in acriviAmerica's Cup 1885 bv Russ Kramer , 1 f J ties relating to marine art and maritime history." Ir is the nations argest organization o (study), oil 12x16 inches · · · h h 600 b A · 1 h'b" · · N mem ers. reg10na ex 1 ltlon m ew contemporary manne arnsts, wit more t an England will travel to Cape Cod (May- 15 June); Bristol, RI (28 June- 1 September); and Bath, ME (24 October-5 January). Derails for each of these exhibitions and respective venues can be found at www.americansocietyofmarineartisrs.com or by writing to: ASMA, PO Box 369, Ambler, PA 19002.

amestown Settlement will exhibit the 16rhcentury watercolor drawings of John White from the British Museum's ''A New World: England's First View of America," 15 July-15 • US Merchant Ships WW2 • Nautical Art/Books October 2008. The drawings are the earliest vis ual record by an Englishman of the flora, • Over 400 titles covering fauna, and people of the New World. White that which is nautical accompanied a number of expeditions sponsored by Sir Walter Raleigh to Virginia in the 1580s and was governor of the short-lived colony at Roanoke Island. He sailed for England in 1587 to obtain more supplies, but war with Spain delayed his return until 1590. By then, the colonists had vanished, and Roanoke became known as the "Los t Colony." Jamestown, America's first permanent English colony, was nor established until 17 years later, about 100 miles away. White's depictions of the Algonquian-speaking people of the region have been an important resource in the development of]amestown Settlement's gallery exhibits and outdoor re-created Powhatan Indian village. Scenes from other parts of the Americas and depictions of peoples of the world also are among the more than 70 drawings in the exhibition . White's work is widely known through adaptations by other artists, especially Theodor de Bry, whose engravings based on White's watercolors illustrate a 1590-edition of Thomas Harriot's "A briefe and true report of the new found land of Virginia."

The Manner of Their Fishing by John White (watercolor, c. 1585)

A rtisr Patrick O 'Brien lost no time after his last exhibition, The Civil 1Vtir at .r-\sea, in Virginia and is currently working toward a one-man-exhibition of paintings depicting historic New York, from Henry Hudson's voyage and the Dutch period to the British colonial period, the Civil War and up to the end of the Age of Sail. The show will be held at the Union League Club, a private club in New York City, in September. For updates, visit his web site at www. parrickobrienstudio.com. (ULC, 38 East 37th St., New York C ity; www.unionleagueclub.org)

(left) The artist at work. This unfinished painting depicts the Brooklyn Bridge, still under construction in 1882. 34

14 From Sea Scout to Master Mariner, Arthur Kimberly before his Romance, by Deirdre O'Regan with Captain Daniel D. Moreland • 18 The Work o...

14 From Sea Scout to Master Mariner, Arthur Kimberly before his Romance, by Deirdre O'Regan with Captain Daniel D. Moreland • 18 The Work o...