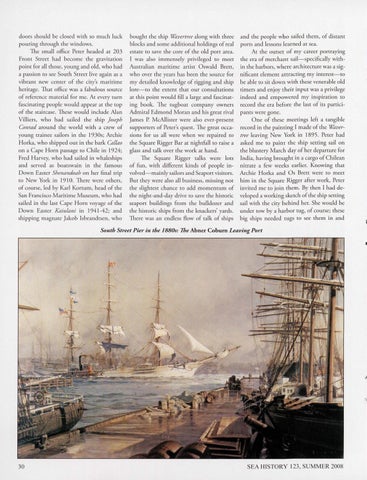 doo rs should be cl osed wirh so much luck pouring rh ro ugh rhe w indows. The small office Perer headed ar 203 Front Srreer had become rhe gravitatio n point fo r all chose, yo ung and old, who had a passion to see Sourh Su eer live again as a vibran t new center of the ciry&#39;s maririme heri tage. That office was a fabulo us source of refere nce material for m e. Ar every tu rn fascinating people would appear ar rhe top of rhe staircase. These wo uld include Alan Villiers, who had sailed rhe ship Joseph Conrad around the wo rld with a crew of yo ung u ainee sailo rs in the 1930s; Archie H orka, who ship ped o ut in rhe bark Callao on a Cape H o rn passage to C hile in 1924; Fred Harvey, who had sailed in whaleships and served as boatswain in rhe famo us D own Eas rer Shenandoah on her fin al trip to New York in 19 10. There were others, of course, led by Karl Kortum, head of rhe San Francisco Maririme M useum, who had sailed in rhe lase Cape H orn voyage of rhe D own Easter Kaiulani in 194 1-42; and shipping magnare Jakob Isbrandrsen, who

bought the ship Wavertree along wirh rhree and the people who sailed them , of distant blocks and some addirional holdings of real ports and lessons learned at sea. Ar rhe outset of my career portraying estare to save rhe core of the old port area. I was also immensely privileged to meet the era of m erchant sail-specifically withAusrralian maritime anist Oswald Brett, in the harbors, wh ere architecture was a sigwho over the years has been the source for nificant element attracting my interest- to my detailed kn owledge of rigging and ship be able to sit down wirh rhese venerable old lo re-to the extent that o ur consultations timers and enjoy their input was a privilege at this point wo uld fill a large and fascinat- indeed and empowered my inspiration to ing book. The tugboat company owners record the era before rhe las t of its particiAdmiral Edmond Mo ran and his great rival pants were gone. One of these m eetings lefr a tangible James P. McAllister were also ever-present supporters of Peter&#39;s quest. The great occa- reco rd in the painting I m ade of the Wa versions for us all were when we repaired to tree leaving New York in 1895 . Peter had the Square Rigger Bar at nightfall to raise a asked me to paint the ship setting sail on glass and talk over the wo rk at hand. the blustery M arch day of her departure for The Square Rigger talks were lots India, having brought in a cargo of Chilean of fun , with different kinds of people in- nitrate a few weeks earlier. Knowing that volved- mainly sailors and Seaport visitors. Archie Horka and O s Brett were to m eet But they were also all business, missing not him in the Square Rigger after work, Peter the slightest chance to add momentum of invired m e to join them. By then I had dethe night-and-day drive to save rhe historic veloped a working sketch of the ship setting seaport buildings fro m the bulldozer and sail with rhe ciry behind her. She would be the historic ships from the knackers&#39; yards. under tow by a harbo r tug, of course; these There was an endless flow of tal k of ships big ships needed tugs to see them in and