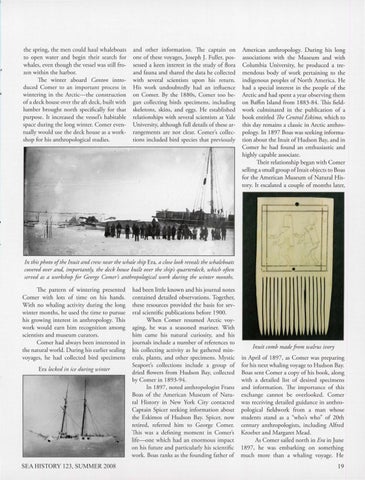 the spring, the men could haul whaleboats to open water and begin their search for whales, even though the vessel was still frozen within the harbor. The winter aboard Canton introduced Comer to an important process in wintering in the Arctic-the construction of a deck house over the aft deck, built with lumber brought north specifically for that purpose. It increased the vessel&#39;s habitable space during the long winter. Comer eventually would use the deck house as a workshop for his anthropological studies.

and other information. The captain on one of these voyages, Joseph J. Fuller, possessed a keen interest in the study of flora and fauna and shared the data he collected with several scientists upon his return. His work undoubtedly had an influence on Comer. By the 1880s, Comer too began collecting birds specimens, including skeletons, skins, and eggs. He established relationships with several scientists at Yale University, although full details of these arrangements are not clear. Comer&#39;s collections included bird species that previously

American anthropology. During his long associations with the Museum and with Columbia University, he produced a tremendous body of work pertaining to the indigenous peoples of North America. He had a special interest in the people of the Arctic and had spent a year observing them on Baffin Island from 1883-84. This fieldwork culminated in the publication of a book entitled The Central Eskimo, which to this day remains a classic in Arctic anthropology. In 1897 Boas was seeking information about th e Inuit of Hudson Bay, and in Comer he had found an enthusiastic and highly capable associate. Their relationship began with Comer selling a smal l group oflnuit objects to Boas for the American Museum of Natural History. It escalated a couple of months later,

In this photo ofthe Inuit and crew near the whale ship Era, a close look reveals the whaleboats covered over and, importantly, the deck house built over the ship&#39;s quarterdeck, which often served as a workshop for George Comer&#39;s anthropological work during the winter months.

The pattern of wintering presented Comer with lots of time on his hands. With no whaling activity during the long winter months, he used the time to pursue his growing interest in anthropology. This work would earn him recognition among scientists and museum curators. Comer had always been interested in the natural world. During his earlier sealing voyages, he had collected bird specimens Era locked in ice during winter

had been little known and his journal notes contained detailed observations. Together, these resources provided the basis for several scientific publications before 1900. When Comer resumed Arctic voyaging, he was a seasoned mariner. With him came his natural curiosity, and his journals include a number of references to Inuit comb made from walrus ivory his collecting activity as he gathered minerals, plants, and other specimens. Mystic in April of 1897, as Comer was preparing Seaport&#39;s collections include a group of for his next whaling voyage to Hudson Bay. dried flowers from Hudson Bay, collected Boas sent Comer a copy of his book, along with a detailed list of desired specimens by Comer in 1893-94. In 1897, noted anthropologist Franz and information. The importance of this Boas of the American Museum of Natu- exchange cannot be overlooked. Comer ral History in New York City contacted was receiving detailed guidance in anthroCaptain Spicer seeking information about pological fieldwork from a man whose the Eskimos of Hudson Bay. Spicer, now students stand as a &quot;who&#39;s who&quot; of 20th retired, referred him to George Comer. century anthropologists, including Alfred This was a defining moment in Comer&#39;s Kroeber and Margaret Mead. life-one which had an enormous impact As Comer sailed north in Era in June on his future and particularly his scientific 1897, he was embarking on something work. Boas ranks as the founding father of much more than a whaling voyage. He