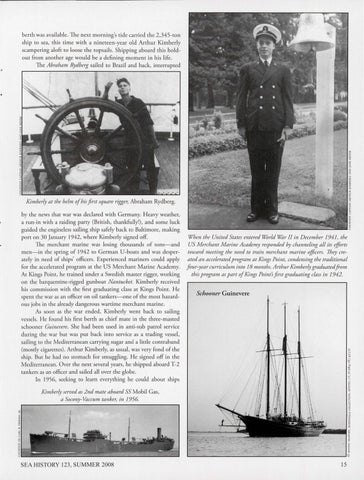 berth was available. The next morning&#39;s tide carried the 2,345-to n ship to sea, this time with a nineteen-year old Ar thur Kimberly scampering aloft to loose the topsails. Shipping aboard this holdout fro m another age wo uld be a defining moment in his life . The Abraham Rydberg sailed to Brazil and back, interrupted

by the news that war was declared with Germany. Heavy weather, a run-in with a raiding parry (British, thankfully!), and some luck guided the engineless sailing ship safely back to Baltimore, maki ng port on 30 January 1942, where Kimberly signed off. The merchant marine was losing thousands of tons-and men-in the spring of 1942 to German U-boars and was desperately in need of ships&#39; officers. Experienced mariners could apply fo r the accelerated program at rhe US Merchant Marine Academy. At Kings Point, he trained under a Swedish mas ter rigger, wo rking on the barquentine-rigged gunboat Nantucket. Kimberly received his com mission with rhe first graduating class at Kings Point. H e spent the war as an officer on oil rankers-one of the most hazardous jobs in the already dangerous wartime merchant marine. As soon as the war ended, Kimberly we nt back to sailing vessels. He fo und his fi rs t berth as chief mate in the three-mas ted schooner Guinevere. She had been used in anti-sub patrol service during the war bur was put back into service as a trading vessel, sailing to the Mediterranean carrying sugar and a little contraband (mostly cigarettes). Arthur Kimberly, as usual, was very fo nd of the ship. But he had no stomach for smuggling. He signed off in the M editerranean. O ver the next several years, he shipped aboard T-2 rankers as an officer and sailed all over the globe. In 195 6, seeking to learn everything he could about ships

When the United States entered World wtlr II in D ecember 1941, the US Merchant Marine Academy responded by channeling all its efforts toward meeting the need to train merchant marine officers. They created an accelerated program at Kings Point, condensing the traditional four-year curriculum into 18 months. Arthur Kimberly graduatedfrom this program as part ofKings Point&#39;s first graduating class in 1942.

Kimberly served as 2 nd mate aboard SS Mobil G as, a Socony- Vaccum tanker, in 1956