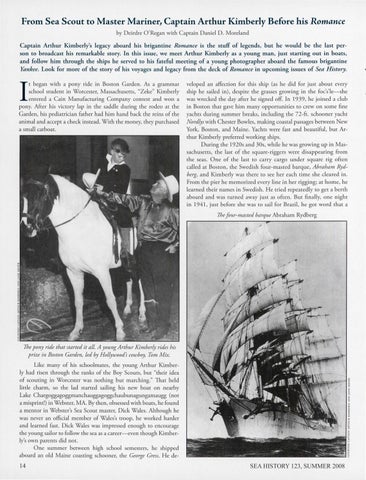 From Sea Scout to Master Mariner, Captain Arthur Kimberly Before his Romance by Deirdre O&#39;Regan wirh Captain D aniel D . Moreland Captain Arthur Kimberly&#39;s legacy aboard his brigantine Romance is the stuff of legends, but h e w ould be the las t person to broadcast his remarkable story. In this issue, we m eet Arthur Kimberly as a young man, just starting out in boats, and follow him through the ship s h e served to his fateful m eeting of a young photographer aboard the famous brigantine Yankee. Look for more of the sto ry of his voyages and legacy from the d eck of Romance in upcoming issues of Sea H istory. t began with a pony ride in Boston Garden. As a grammar school student in Worces ter, Massachusetts, &quot;Zeke&quot; Kimberly entered a Cain Manufacturing Company contest and won a pony. After his victory lap in the saddle during the rodeo at the Garden, his pediatrician father had him hand back the reins of the animal and accept a check insread. With the money, they purchased a small catboat.

veloped an affection for this ship (as he did for just abour every ship he sailed in), despite the grasses growing in the foc&#39;s&#39; le-she was wrecked the day after he signed off. In 1939, he joi ned a club in Boston that gave him many opportunities to crew on so me fine yachts during summer breaks, including the 72-ft. schooner yacht Nordlys with Chester Bowles, making coastal passages between New York, Boston, and Maine. Yachts were fas t and beautiful, but Arthur Kimberly preferred working ships. During the 1920s and 30s, while he was growing up in M assachusetts, the last of the square-riggers were disappearing from the seas. One of the last to carry cargo under square rig often called at Boston, the Swedish four-mas ted barque, Abraham Rydberg, and Kimberly was there to see her each time she cleared in . From the pier he memorized every line in her rigging; at home, he learned their names in Swedish. H e tried repeatedly to get a berth aboard and was turned away just as often . But finally, one nigh r in 194 1, just before she was to sail for Brazil, he got word that a

The pony ride that started it all. A young Arthur Kim berly rides his prize in Boston Garden, led by Hollywood&#39;s cowboy, Tom Mix. Like many of his schoolmates, the young Arthur Kimberly had risen through the ranks of the Boy Scouts, but &quot;their idea of scouting in Worcester was nothing but marching.&quot; That held little charm, so the lad started sailing his new boat on nearby Lake Chargoggagoggmanchauggagoggchaubunagungamaugg (not a misprint!) in Webster, MA. By then, obsessed with boats, he fo und a mento r in Webster&#39;s Sea Scout master, Dick Wales. Although he was never an offi cial member of Wales&#39;s troop, he worked harder and learned fas t. Dick Wales was impressed enough to encourage the yo ung sailor to follow the sea as a career-even though Kimberly&#39;s own parents did not. One summer between high school semesters, he shipped aboard an old Maine coasting schooner, the George Gress. H e de-