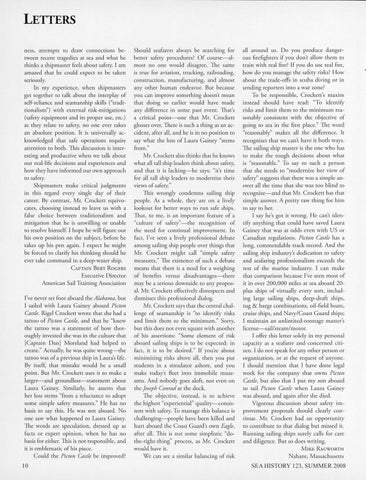 LETTERS ness, attempts to draw connections berween recent tragedies at sea and what he thinks a shipmaster feels abo ut safety. I am amazed that he could expect to be taken seriously. In my experience, when shipmasters get together to talk abo ut the interplay of self-reliance and seamanship skills (&quot;traditionalism&quot;) with external risk-mitigations (safety equipment and its proper use, etc.) as they relate to safety, no one ever takes an absolute position. It is universally acknowledged that safe operations require attentio n to both. 1 his discussion is interesting and productive when we talk about o ur real-life decisions and experiences and how they have informed our own approach to safety. Shipmasters make critical judgments in this regard every single day of their career. By contrast, Mr. Crockett equivocates, choosing instead to leave us with a false choice berween traditionalism and mitigation that he is unwilling or unable to resolve himself. I hope he will figure out his own position on the subj ect, before he takes up his pen again. I expect he might be forced to clarify his thinking should he ever take command in a deep-water ship. CAPTAIN BERT ROGERS

Executive Director American Sail Training Association I&#39;ve never set foot aboard the Alabama, but I sailed with Laura Gainey aboard Picton Castle. Rigel Crockett wrote that she had a tattoo of Picton Castle, and that he &quot;knew the tattoo was a statement of how thoroughly invested she was in the culture that [Captain Dan] Moreland had helped to create.&quot; Actually, he was quite wro ng-the tattoo was of a previous ship in Laura&#39;s life. By itself, that mistake would be a small point. But Mr. Crockett uses it to make a larger-and groundless-statement about Laura Gainey. Similarly, he asserts that her loss stems &quot;from a reluctance to adopt some simple safety measures.&quot; He has no basis to say this. He was not aboard. No one saw what happened to Laura Gainey. The words are speculation, dressed up as facts or experr opinion, when he has no basis for either. This is not responsible, and it is emblematic of his piece. Could the Picton Castle be improved? 10

Should seafarers always be searching for better safety procedures? Of course-almost no one would disagree. The same is true for aviation, trucking, railroading, construction, manufacturing, and almost any other human endeavor. But because you can improve something doesn&#39;t mean that doing so earlier would have made any difference in some past event. That&#39;s a critical point-one that Mr. Crockett glosses over. There is such a thing as an accident, after all, and he is in no position to say what the loss of Laura Gainey &quot;stems from. &quot; Mr. Crockett also thinks that he knows what all tall ship leaders think about safety, and that it is lacking-he says: &quot;it&#39;s time for all tall ship leaders to modernize their views of safety.&quot; This wrongly condemns sailing ship people. As a whole, they are on a lively looko ut for better ways to run safe ships. That, to me, is an imporrant feature of a &quot;culture of safety&quot;-the recognition of the need for continual improvement. In fact, I&#39;ve seen a lively professional debate among sailing ship people over things that Mr. Crockett might call &quot;simple safety measures.&quot; The existence of such a debate means that there is a need for a weighing of benefits versus disadvantages-there may be a serious downside to any proposal. Mr. Crockett effectively disrespects and dismisses this professional dialog. Mr. Crockett says that the central challenge of seamanship is &quot;to identify risks and limit them to the minimum.&quot; Sorry, but this does not even square with another of his assertions : &quot;Some element of risk aboard sailing ships is ro be expected: in fact, it is to be desired.&quot; If you&#39;re abo ut minimizing risks above all, then you put students in a simulator ashore, and you make today&#39;s fleet into immobile museums. And nobody goes aloft, not even on the Joseph Conrad at the dock. The objective, instead, is to achieve the highest &quot;experiential&quot; quality-consistent with safety. To manage this balance is challenging-people have been killed and hurt aboard the Coast G uard&#39;s own Eagle, after all. This is not some simplistic &quot;clothe-right-thing&quot; process, as Mr. Crockett would have it. We can see a similar balancing of risk

all around us. Do you produce dangerous firefighters if you don&#39;t allow them to train with real fire? If you do use real fire, how do you manage the safety risks? How about the trade-offs in scuba diving or in sending reporters into a war zone? To be responsible, Crockett&#39;s maxim instead should have read: &quot;To identify risks and limit them to the minimum reasonably consistent with the objective of going to sea in the first place.&quot; The word &quot;reasonably&quot; makes all the difference. It recognizes that we can&#39;t have it both ways. The sailing ship master is the one who has to make the rough decisions about what is &quot;reasonable.&quot; To say to such a person that she needs to &quot;modernize her view of safety&quot; suggests that there was a simple answer all the time that she was too blind to recognize-and that Mr. Crockett has that simple answer. A pretty raw thing for him to say to her. I say he&#39;s got it wrong. He can&#39;t identify anything that could have saved Laura Gainey that was at odds even with US or Canadian regulations. Picton Castle has a long, commendable track record. And the sailing ship industry&#39;s dedication to safety and seafaring professionalism exceeds the rest of the marine industry. I can make that comparison because I&#39;ve seen most of it in over 200,000 miles at sea aboard 20plus ships of virtually every sort, including large sailing ships, deep-draft ships, tug &amp; barge combi nations, oil-field boats, cruise ships, and Navy/Coast Guard ships; I maintain an unlimited-tonnage master&#39;s license-sail/ steam/ motor. I offer this letter solely in my personal capacity as a seafarer and concerned citizen. I do not speak for any other person or organization, or at the request of anyone. I should mention that I h ave done legal work for the company that owns Picton Castle, but also that I put my son aboard to sail Picton Castle when Laura Gainey was aboard, and again after she died. Vigoro us discussion abo ut safety improvement proposals should clearly continue. Mr. Crockett had an opportunity to contribute to that dialog but missed it. Running sailing ships surely calls for care and diligence. But so does writing. MrKE RAuwoRTH Nahant, Massachusetts SEAHISTORY 123, SUMMER 2008