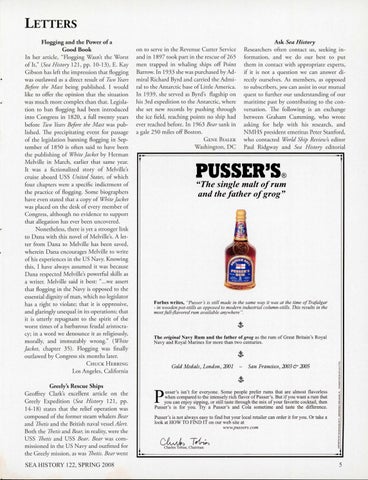 LETTERS Flogging and the Power of a Good Book In her article, "Flogging Wasn't the Worst oflt," (Sea History 121, pp. 10-13) , E. Kay Gibson has left the impression that flogging was outlawed as a direct result of Two Years Before the Mast being published. I would like to offer the opinion that the situation was much more complex than that. Legislation to ban flo gging had been introduced into Co ngress in 1820, a full twenty years before Two Years Before the Mast was published. The precipitating event for passage of the legislation banning flogging in September of 1850 is often said to have been the publishing of White jacket by Herman Melville in March, earlier that same year. It was a fictionalized story of Melville's cruise aboard USS United States, of which four chapters were a specific indictment of the practice of flogging. Some biographers have even stated that a copy of White jacket was placed on the desk of every member of Congress, although no evidence to support that allegation has ever been uncovered. Nonetheless, there is yet a stronger link to Dana with this novel of Melville's. A letter from Dana to Melville has been saved, wherein Dana encourages Melville to write of his experiences in the US Navy. Knowing this, I have always assumed it was because Dana respected Melville's powerful skills as a writer. Melville said it best: " ... we assert that flogging in the Navy is opposed to the essential dignity of man, which no legislato r has a right to violate; that it is oppressive, and glaringly unequal in its operations; that it is utterly repugnant to the spirit of the worst times of a barbaro us feudal aristocracy; in a wo rd we denounce it as religiously, morally, and immutably wrong." (White jacket, chapter 35). Flogging was finally outlawed by Congress six months later.

on to serve in the Revenue Curter Service and in 1897 took part in the rescue of265 men trapped in whaling ships off Point Barrow. In 1933 she was purchased by Admiral Richard Byrd and carried the Admiral to the Antarctic base of Little America. In 1939, she served as Byrd's flagship on his 3rd expedition to the Antarctic, where she set new reco rds by pushing through the ice field , reaching points no ship had ever reach ed before. In 1963 Bear sank in a gale 25 0 miles off Boston. GENE BIALEK

Ask Sea History Researchers often contact us, seeking information, and we do our best to put them in contact with appropriate experts, if it is not a question we can answer directly ourselves. As m embers, as opposed to subscribers, you can assist in our mutual quest to further our understanding of our maritime past by contriburing to the conversation. The fo llowing is an exchange between Graham C umming, who wrote asking for help with his research, and NMH S president em eritus Peter Stanford, who contacted World Ship Review's editor Paul Ridgway and Sea History editorial

PUSSER'SÂŽ "The single malt of rum and the father ofgrog"

Forbes writes, "Pusser s is still made in the same way ii was at the time of Trafalgar - in wooden pot-stills as opposed to modern industrial column-stills. This results in the most fall-flavored rum available any where ".

The original Navy Rum and the father of grog as the rum of Great Britain's Royal Navy and Royal Marines for more than two centuries.

Greely's Rescue Ships Geoffrey Clark's excellent article on the Greely Expedition (Sea History 121, pp. 14-18) states that the relief operation was composed of the former steam whalers Bear and Thetis and the British naval vessel Alert. Both the Thetis and Bear, in reality, were the USS Thetis and USS Bear. Bear was commissioned in the US Navy and outfitted for the Greely mission, as was Thetis. Bear went SEA HISTORY 122, SPRING 2008

usser's isn't for everyone. Some people prefer rums that are almost flavorless when compared to the intensely rich flavor of Pusser's. But if you want a rum that you can enj oy sipping, or still taste through the mix of your favorite cocktail, then Pusser 's is for you. Try a Pusser's and Cola sometime and taste the difference.

Pusser's is not always easy to find but your local retailer can order it for you. Or take a look at HOW TO FIND IT on our web site at www.pussers.com