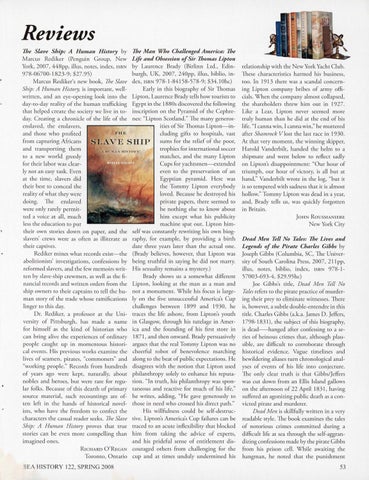 Reviews The Slave Ship: A Human History by Marcus Rediker (Penguin Gro up, N ew York, 2007, 448pp, illus, notes, index, ISBN 978-06700-1823-9; $27.95) Marcus Rediker's new book, The Slave Ship: A Human History, is imporram, wellwritten, and an eye-opening look into the day-to-day reality of the human trafficking that helped create the society we live in today. Creating a chronicle of the life of the enslaved, the enslavers, and those who profited TH E from capturing Africans and transporting them to a new wo rld greedy for their labor was clearly not an easy task. Even at the time, slavers did their best to con ceal the reality of what they were doing. 1he enslaved were only rarely permitted a voice at all, much less the education to put their own stories down on paper, and the slavers' crews were as often as illiterate as their captives. Rediker mines what records exist- the abolitionists' investigations, confessions by reform ed slavers, and the few memoirs written by slave-ship crewmen, as well as the financial records and writte n orders from the ship owners to their captains to tell the human story of the trade whose ramifications linger to this day. Dr. Rediker, a professo r at the University of Pittsburgh, has made a name for himself as the kind of historian who can bring alive the experiences of ordinary people caugh t up in momentous historical evem s. His previous wo rks examine the lives of seamen , pirates, "commoners" and "working peopl e." Records from hundreds of years ago were kept, naturally, about nobles and heroes, but were rare for regular folks. Because of this dearth of primary source material, such recounrings are often left in the hands of historical novelists, who have the freedom to confect the characters the casual reader seeks. The Slave Ship: A Human History proves that true sto ries can be even more co mpelling than imagined ones.

The Man Who Challenged America: The Life and Obsession of Sir Thomas Lipton

by Laurence Brady (Birlinn Ltd., Edinburgh, UK, 2007, 240pp, illus, biblio, index, ISBN 978- 1-84 158-578-9; $34 .lOhc) Early in this biography of Sir Thom as Lipton, Laurence Brady tells how tourists to Egypt in the 1880s discovered the following inscription on the Pyramid of the Cephrenes: "Lipton Scotland." The many generosities of Sir Thomas Lipton-including gifts to hosp itals, vast sums for the relief of the poor, trophies for imernational soccer marches, and the many Lipton Cups for yachtsmen-extended even to the preservation of an Egyptian pyramid. Here was the Tommy Lipton everybody loved. Because he destroyed his private papers, there seemed to be nothing else to know about him except what his publicity machine spat out. Lipton himself was constantly rewriting his own biography, for example, by providing a birth date three years later than the actual one. (Brady beli eves, however, that Lipton was being truthful in saying he did not marry. His sexuality remains a mys tery.) Brady shows us a somewhat different Lipton , looking at the man as a man and not a monument. While his focus is largely on the fi ve unsuccessful America's C up challenges between 1899 and 1930, he traces the life ashore, from Lipton's yo uth in Glasgow, through his tutelage in America and the founding of his first store in 187 1, and then onward. Brady persuasively argues that the real Tommy Lipton was no cheerful robot of benevolence m arching along to the beat of publi c expectations. H e disagrees with the noti o n that Lipton used philanthropy so lely to enhance his reputation. "In truth, his phi lanthropy was spontaneous and reactive for much of his life," he writes, adding, "He gave generously to those in need who crossed his direct path ." His willfulness could be self-destructive. Lipton's America's C up failures can be traced to an acute inflexibility that blocked him from taking the advice of experts, and his prideful sense of entitlement disRICHARD O 'REGAN couraged others from challenging fo r the Toronto, Ontario cup and at times unduly undermined his

relationship with the New York Yacht C lub. These characteristics harmed his business, too. In 191 3 there was a scandal concerning Lipton company bribes of army officials. When the company almost collapsed, the shareholders threw him our in 1927. Like a Lear, Lipton never seem ed more truly hum an than he did at the end of his life. "I canna win, I canna win," he muttered after Shamrock Vlost the las t race in 1930. Ar that very moment, the winning skipper, Harold Vanderbilt, handed the helm to a shipmate and went below to reflect sadly on Lipton's disappointment: "Our hour of triumph, our ho ur of victo ry, is all but at hand," Vanderbilt wrote in the log, "but it is so tempered with sadness that it is almost hollow." Tommy Lipton was dead in a year, and, Brady tells us, was quickly forgo tten in Britain. JottN Ro usMAN IERE New York C ity

Dead Men Tell No Tales: The Lives and Legends of the Pirate Charles Gibbs by Joseph Gibbs (Columbia, SC, The University of South Carolina Press, 2007, 211 pp, ill us, notes, biblio, index, ISBN 978-157003-693-4, $29.95hc) Joe Gibbs's title, Dead Men Tell No Tales refers to the pirate practice of murdering their prey to eliminate witnesses. There is, however, a subtle double-em endre in this title. C harles Gibbs (a.k.a. James D. Jeffers, 1798-1831), the subject of this biography, is dead- -hanged after confessing to a series of hei nous crimes that, although plausible, are difficult to corroborate through hi storical evidence. Vague timelines and bewildering aliases turn chronological analyses of evems of his life imo co njecture. The only clear truth is that G ibbs/Jeffers was cut down from an Ellis Island gallows on th e afternoon of 22 April 183 1, having suffered an agonizing public death as a convicted pirate and murderer. Dead Men is skillfully written in a very readable style. The book examines the tales of notorio us crimes committed during a difficult life at sea through the self-aggrandizing confessions made by the pirate Gibbs from his prison cell. While awaiting the hangman, he noted that the punishment