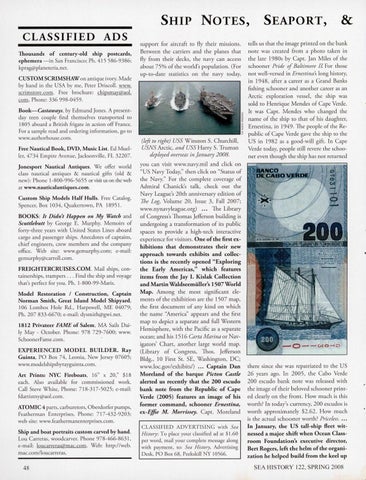 support for aircraft to fly their missions. Berween the carriers and the planes that fly from their decks, the navy can access abo ut 75% of the wo rld's population. (For up-to-date statistics on the navy today,

tells us that the image printed on the bank note was created from a photo taken in the late 1980s by Capt. Jan Miles of the schooner Pride of Baltimore fl For those not well-versed in Ernestina's long history, in 1948, after a career as a Grand Banks fishing schooner and another career as an Arctic exploration vessel, the ship was sold to Henrique Mendes of Cape Verde. It was Capt. Mendes who changed the name of the ship to that of his daughter, Ernestina, in 1949. The people of the Republic of Cape Verde gave the ship to the US in 1982 as a good-will gift. In Cape Verde today, people still revere the schooner even though the ship has not returned

yo u can visit www.navy.mil and click on "US Navy Today," then click on "Status of the Navy." For the complete coverage of Admiral Chanick's talk, check our the Navy League's 20th anniversary ed ition of The Log, Volume 20, Issue 3, Fall 2007; www.nynavyleague.org) .. â&#x20AC;˘ The Library of Congress's Thomas Jefferson building is undergoing a transformation of its public spaces to provide a high-tech interactive experience for visitors. One of the first exhibitions that demonstrates their new approach towards exhibits and collections is the recently opened "Exploring the Early Americas," which features items from the Jay I. Kislak Collection and Martin Waldseemiiller's 1507 World Map. Among the most significant elements of the exhibition are the 1507 map, the first document of any kind on which the name ''America'' appears and the first map to depict a separate and full Western Hemisphere, with the Pacific as a separate ocean; and his 1516 Carta Marina or Navigators' Chart, another large wo rld map. (Library of Congress, Thos. Jefferson Bldg., 10 First St. SE, Washington, DC; www. loc.gov/exhibits/) ... Captain Dan there since she was repatriated to the US Moreland of the barque Picton Castle 26 years ago. In 2 005, the Cabo Verde alerted us recently that the 200 escudo 200 escudo bank note was released with bank note from the Republic of Cape the image of their beloved schoo ner prinrVerde (2005) features an image of his ed clearly on the front. How much is this former command, schooner Ernestina, worth ? In today's c urrency, 200 escudos is ex-Effie M. Morrissey. Capt. Moreland worth approximately $2.62. How much is the actual schooner worth ? Priceless. . . . In January, the US tall-ship fleet witCLASSIFIED ADVERTISING with Sea nessed a major shift when Ocean ClassHisto ry: To place your classified ad at $1.60 per word, mail yo ur complete message along room Foundation's executive director, with payment, ro: Sea History, Advertising Bert Rogers, left the helm of the organiDesk, PO Box 68, Peekskill NY 10566. zation he helped build from the keel up SEA HISTORY 122, SPRING 2008