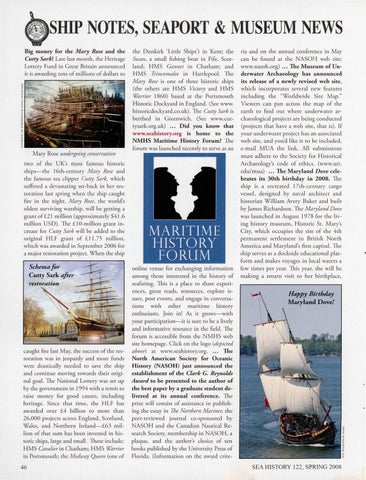 @>sHIP NOTES, SEAPORT & MUSEUM NEWS Big money for the Mary Rose and the Cutty Sark! Late last month, the Heritage Lottery Fund in Great Britain annou nced it is awarding tens of millions of dollars to

the Dunkirk 'Little Ships') in Kent; the Swan, a small fishing boat in Fife, Scotland; HMS Gannet in Chatham; and HMS Trincomalee in Hartlepool. The Mary Rose is one of three historic ships (the ochers are HMS Victory and HMS ~rrior 1860) based at the Portsmouth Historic Dockyard in England. (See www. historicdockyard.co. uk). The Cutty Sark is berthed in Greenwich. (See www.cucrysark.org. uk) . . . Did you know that www.seahistory.org is home to the NMHS Maritime History Forum? The forum was launched recently to serve as an

Mary Rose undergoing conservation two of the UK's most famous historic ships-the 16th-century Ma ry Rose and the famous tea clipper Cutty Sark, which suffered a devastating set-back in her restoration last spring when the ship caught fire in the night. Mary Rose, the world's oldest surviving warship, will be getting a grant of £2 1 million (approximately $41.6 million USD). The £10-million grant increase for Cutty Sark will be added to the original HLF grant of £11.75 million, which was awarded in September 2006 for a major restoration project. When the ship

caught fire last May, the success of the restoration was in jeopardy and more funds were drastically needed to save the ship and continue moving towards their original goal. The National Lottery was set up by the government in 1994 with a remit to raise money for good causes, including heritage. Since that time, the HLF has awarded over £4 billion to more than 26,000 projects across England, Scotland, Wales, and Northern Ireland-£63 million of chat sum has been invested in historic ships, large and small. These include: HMS Cavalier in Chatham; HMS ~rrior in Portsmouth; the Medway Queen (one of

online venue for exchanging informatio n among those interested in the history of seafaring. This is a place to share experiences, great reads, resources, explore issues, post events, and engage in conversations with other marmme history enthusiasts. Join in! As it grows-with your participation-it is sure to be a lively and informative resource in the field. The forum is accessible from the NMHS web site homepage. Click on the logo (depicted above) at www.seahistory.org. . . . The North American Society for Oceanic History (NASOH) just announced the establishment of the Clark G. Reynolds Award to be presented to the author of the best paper by a graduate student delivered at its annual conference. The prize will consist of assistance in publishing the essay in The Northern Mariner, the peer-reviewed journal co-sponsored by NASOH and the Canadian Nautical Research Sociery, membership in NASOH, a plaque, and the author's choice of ten books published by the Universiry Press of Florida. (Information on the award crite-

ria and on the an nual conference in May can be found at the NASOH web site: www.nasoh.org) ... The Museum of Underwater Archaeology has announced its release of a newly revised web site, which incorporates several new features including the "Worldwide Site Map." Viewers can pan across the map of the earth to find out where underwater archaeo logical projects are being conducted (projects chat have a web site, that is). If your underwater project has an associated web site, and you'd like it to be included, e-mai l MUA the link. All submissions must adhere to the Society for Historical Archaeology's code of ethics. (www.uri. edu/m ua) ... The Maryland Dove celebrates its 30th birthday in 2008. The sh ip is a recreated 17 th-century cargo vessel, des igned by naval architect and historian William Avery Baker and built by James Richardson. The Maryland Dove was launched in August 1978 for the living history museum, Historic St. Mary's City, which occupies the site of the 4th permanent settlement in British North America and Maryland's first capital. The ship serves as a dockside educational platform and makes voyages in local waters a few times per year. This year, she will be making a return visit to her birthplace,