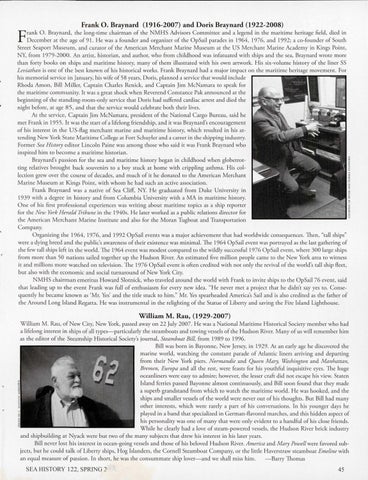 Frank 0. Braynard (1916-2007) and Doris Braynard (1922-2008) rank 0 . Braynard, rhe long-rime chairman of rhe NMHS Advisors C ommircee and a legend in rhe maririme herirage field , died in D ecember ar rhe age of 91. H e was a fo under and organizer of che OpSail parades in 1964, 1976, and 1992; a co-founder of Sourh Street Seaport M useum, and curato r of the American M erchant M arine Museum at the US M erchant Marine Academy in Kin gs Point, NY, fro m 1979-2000 . An artist, histori an, and author, who from childhood was infa ruaced wirh ships and rhe sea, Braynard wro re more than forry books on ships and maririme history, many of them illustrated with his own arrwork. His six-volume history of the liner SS Leviathan is one of che best known of his historical works. Frank Braynard had a major impact on the maritime heritage move ment. For his memori al service in January, his wife of 58 years, Doris, planned a service thar would include Rh oda Amon, Bill Miller, Captain C harles Renick, and Captain Jim McNamara to speak for the m aririme communiry. It was a great shock when Reverend Constance Pak announced ac che beginning of the standing-room-only service that Doris had suffered cardiac arres r and died rhe night before, ac age 85, and char rhe service would celebrate both their lives . Ar rhe service, Captain Jim M cNam ara, president of the Na tional Cargo Bureau, said he m et Frank in 1955. Ir was the start of a lifelo ng fri endship, and it was Braynard's encouragement of his interesr in che U S-flag m erchant m arine and maritime history, whi ch resulted in his atrending New York Sta te Maritime College at Fo rr Schuyler and a career in the shipping industry. Fo rmer Sea H istory editor Lincoln Paine was among those who said it was Frank Braynard who inspired him to becom e a m aritime historian. Braynard's passio n for the sea and maritim e history began in childhood when globetro tring relatives brought back souvenirs to a boy stuck at home with crippling as thma. His collection grew over the course of decades, and much of it he donated to the American M erchant Marin e M useum ar Kings Point, with whom he had such an active associarion. Frank Braynard was a native of Sea C liff, N Y. H e graduared from Duke Univers iry in 1939 wirh a degree in history and from Columbia Universiry with a MA in m ari rime history. O ne of his first professional experiences was writing about maririme topics as a ship reporter fo r rhe New York H erald Tribune in rhe 1940s. H e lacer worked as a publi c relations director fo r the Am erican M erchant M arine Institute and also for the Moran Tugboar and Transportation Company. O rganizing the 1964, 1976, and 1992 OpSail events was a m ajor achievement that had wo rldwide consequences. Then, "tall ships" were a dying breed and the public's awareness of rheir existence was minimal. The 1964 OpSail event was po rtrayed as rhe lasr garhering of rhe few rall ships left in the world. The 1964 event was modesr co mpared to the wildly successful 1976 O pSail event, where 300 large ships fro m mo re rhan 50 n a tions sailed together up the Hudson River. An estim ated five millio n people cam e to the New York area to witness ir and millions more watched o n television . The 1976 OpSail event is ofren credited wirh nor only rhe revival of rhe world's tall ship fl eer, but also with the economic and social turnaround of New York C iry. NMH S chairman em eritus Howard Sl otnick, who traveled around rhe world with Frank ro invire ships to rhe OpSail 76 event, said thar leading up to the event Frank was full of enthusiasm fo r every new idea. "H e never mer a proj ect that he didn't say yes to. Consequently he became known as 'M r. Yes' and the title stuck to him ." Mr. Yes spearheaded America's Sail and is also credited as the fa ther of the Around Long Island Regatta. H e was instrumental in the relighting of the Statue of Liberry and saving the Fire Island Lighthouse.

William M. Rau, (1929-2007) W illiam M. Rau, of New Ciry, New York, passed away on 22 July 2007 . H e was a Na tional M aririme Historical Sociery member who had a lifelong interesr in ships of all rypes-particularly rhe sreamboats and towing vessels of the Hudson Rive r. Many of us will rem ember him as the editor of the Steamship Historical Sociery's jo urnal, Steamboat Bill, from 1989 to 1996. Bill was bo rn in Bayonne, New Jersey, in 1929 . At an early age he discovered the marine world, wa tching the constant parade of Atlantic liners arriving and departing from rheir New Yo rk piers. N ormandie and Queen Mary, Washington and M anhattan, Bremen, Europa and all the rest, were feascs for his yourhful inquisitive eyes. The huge oceanliners were easy to admire; however, the lesser crafr did nor escape his view. Staren Island ferries passed Bayonne almost co ntinuously, and Bill soon found that they made a superb grandstand from which to warch the m aritime world. H e was hooked, and rhe ships and sm aller vessels of the world were never o ut of his rhoughts. But Bill had many orher interests, which we re rarely a part of his co nversations. In his yo unger days he played in a band thar specialized in German-fl avo red marches, and this hidden aspect of his personaliry was o ne of many that were only evident to a handful of his close fri ends. While he clearly had a love of sream-powered vessels, the Hudso n Ri ver brick indusrry and shipbuilding at N yack were bur rwo of rhe many subj ecrs rhar drew his interesr in his later years. Bill never lost his interest in ocean-going vessels and those of his beloved Hudson River. America and Mary PoweLL were favo red subjects, but he co uld calk ofLiberry ships, Hog Islanders, che Cornell Sceamboat C ompany, or che little H averscraw sceamboat Emeline with an equal measure of passion. In sh ort, he was che consummate ship lover-and we shall miss him. - Barry Thomas