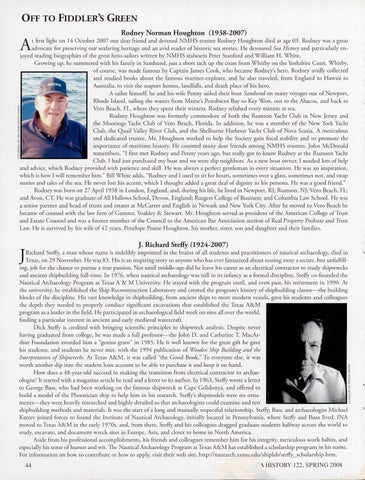 t first light on 14 October 2007 our dear friend and devoted NMHS trustee Rodn ey Houghton died at age 69. Rodney was a great advocate for preserving o ur seafaring heritage and an avid reader of historic sea stories. He devoured Sea H istory and particularly enjoyed reading biographies of the great hero-sailors written by NMHS stalwarts Peter Stanford and William H . White. Growing up, he summered with his family in Sandsend, just a short tack up the coast from Whitby on the Yorkshire Coast. Whitby, of course, was made famous by Captain James Cook, who became Rodney's hero. Rodney avidly collected and studied books about the famous mariner-explorer, and he also traveled, from England to Hawaii to Australia, to visit the seaport homes, landfalls, and death place of his hero. A sailor himself, he and his wife Penny sailed their boat Sandsend on many voyages out of Newport, Rhode Island, sailing the waters from Maine's Penobscot Bay to Key West, out to th e Abacos, and back to Vero Beach, FL, where they spent their winters. Rodney relished every minute at sea. Rodney Houghton was formerly commodore of both the Rumson Yacht Club in New Jersey and the Moorings Yacht C lub of Vero Beach , Florida. In addition, he was a member of the New York Yacht Club, the Quail Valley River Club, and the Shelburne Harbour Yacht C lub of Nova Scotia. A meticulous and dedicated trustee, Mr. Houghton worked to help the Society gain fiscal stability and to promote the importance of maritime history. He counted many dear friends among NMHS trustees. John McDonald remembers, "I first met Rodney and Penny years ago, but really got to know Rodney at the Rumson Yacht Club. I had just purchased m y boat and we were slip neighbors. As a new boat owner, I needed lots of help and advice, which Rodn ey provided with patience and skill. He was always a perfect gentleman in every situation. H e was an inspiration, which is how I will remember him." Bill White adds, "Rodney and I used to sit for hours, sometimes over a glass, sometimes not, and swap stories and tales of the sea. He never lost his accent, which I thought added a great deal of dignity to his persona. He was a good friend." Rodney was born on 27 April 1938 in London, England, and, during his life, he lived in Newport, RI; Rumson , NJ; Vero Beach, FL; and Avon, CT. He was graduate of All Hallows School, Devon, England; Rutgers College of Business; and Columbia Law School. He was a senior partner and head of trusts and estates at McCarter and English in Newark and New York City. After he moved to Vero Beach he became of co unsel with the law firm of Gunster, Yoakley & Stewart. Mr. Houghton served as president of the American College of Trust and Estate C ounsel and was a former member of the Council to the American Bar Association section of Real Property Probate and Trust Law. H e is survived by his wife of 42 years, Penelope Pearse Houghton, his mother, sister, son and daughter and their famili es.

J. Richard Steffy (1924-2007) Richard Steffy, a man whose nam e is indelibly imprinted in the brains of all students and practitioners of nautical archaeology, died in ] Texas, on 29 November. He was 83. His is an inspiring story to anyone who has ever fantasized about tossing away a secure, but unfulfilling, job for the chance to pursue a true passion. Not until middle-age did he leave his career as an electrical contractor to study shipwrecks and ancient shipbuilding full-time. In 1976, when nautical archaeology was still in its infancy as a formal discipline, Steffy co-founded the Nautical Archaeology Program at Texas A & M University. He stayed with the program until, and even past, his retirement in 1990. At the university, he established the Ship Reconstruction Laboratory and created the program's history of shipbuilding classes -the building blocks of the discipline. His vast knowledge in shipbuilding, from ancient ships to more modern vessels, gave his students and colleagues the depth they needed to properly conduct significant excavations that established the Texas A&M program as a leader in the field . He participated in archaeological field work on sites all over the world, finding a particular interest in ancient and early medieval watercraft. Di ck Steffy is credited with bringing scientific principles to shipwreck analysis. Despite never having graduated from college, he was made a full professor-the John D. and Catherine T. MacArthur Foundation awarded him a "genius grant" in 1985. He is well known for the great gift he gave his students, and students he never met, with the 1994 publication of Wooden Ship Building and the Interpretation of Shipwrecks. At Texas A&M, it was called "the Good Book." To everyone else, it was worth another dip into the student loan acco unt to be able to purchase it and keep it on hand. How does a 48-year-old succeed in making the transition from electrical contractor to archaeologist? It started with a magazine article he read and a letter to its author. In 1963, Steffy wrote a letter to George Bass, who had been wo rking on the famous shipwreck at Cape Gelidonya, and offered to build a model of the Phoenician ship to help him in his research. Steffy's shipmodels were no ornaments- they were heavily researched and highly detailed so that archaeologists could examine and test shipbuilding methods and materials. It was the start of a long and mutually respectful relationship. Steffy, Bass, and archaeologist Michael Katzev joined forces to found the Institute of Nautical Archaeology, initially located in Pennsylvania, where Steffy and Bass lived. INA moved to Texas A&M in the early 1970s, and, fro m there, Steffy and his colleagues dragged graduate students halfway across the world to study, excavate, and document wreck sites in Europe, Asia, and closer to home in North America. Aside from his professional accomplishments, his fri ends and co lleagues rem ember him for his integrity, meticulous work habits, and especially his sense of humor and wit. The Nautical Archaeology Program at Texas A&M has established a scholarship program in his name. For information on how to contribute or how to apply, visit their web site, http:// nautarch.tamu.edu/shiplab/steffy_scholarship.htm.