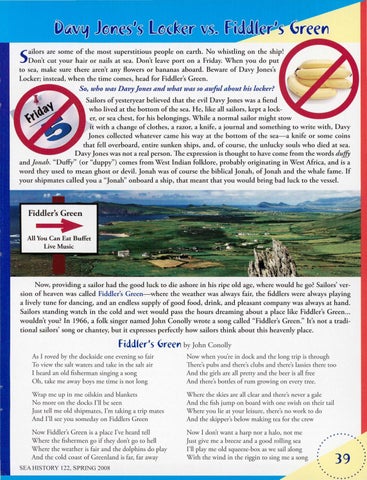 ailors are some of the most superstitious people on earth. No whistling on the ship! Don't cut your hair or nails at sea. Don't leave port on a Friday. When you do put to sea, make sure there aren't any flowers or bananas aboard. Beware of Davy Jones's Locker; instead, when the time comes, head for Fiddler's Green.

So, who was Davy Jones and what was so awfu,/ about his locker? Sailors of yesteryear believed that the evil Davy Jones was a fiend who lived at the bottom of the sea. He, like all sailors, kept a locker, or sea chest, for his belongings. While a normal sailor might stow it with a change of clothes, a razor, a knife, a journal and something to write with, Davy Jones collected whatever came his way at the bottom of the sea-a knife or some coins that fell overboard, entire sunken ships, and, of course, the unlucky souls who died at sea. Davy Jones was not a real person. The expression is thought to have come from the words dufljt and Jonah. "Duffy'' (or "duppy") comes from West Indian folklore, probably originating in West Africa, and is a word they used to mean ghost or devil. Jonah was of course the biblical Jonah, of Jonah and the whale fame. If your shipmates called you a "Jonah" onboard a ship, that meant that you would bring bad luck to the vessel.

All You Can Eat Buffet

Now, providing a sailor had the good luck to die ashore in his ripe old age, where would he go? Sailors' version of heaven was called Fiddler's Green-where the weather was always fair, the fiddlers were always playing a lively tune for dancing, and an endless supply of good food, drink, and pleasant company was always at hand. Sailors standing watch in the cold and wet would pass the hours dreaming about a place like Fiddler's Green ... wouldn't you? In 1966, a folk singer named John Conolly wrote a song called "Fiddler's Green." It's not a traditional sailors' song or chantey, but it expresses perfectly how sailors think about this heavenly place.

f iddfer's Greeri by John Conolly As I roved by the dockside one evening so fair To view th e salt waters and take in the salt air I h eard an old fish erman singing a song O h, take me away boys me time is not long

Now when you're in dock and the long trip is through There's pubs and there's clubs and there's lassies there too And the girls are all pretty and the beer is all free And there's bottles of rum growing on every tree.

Wrap me up in m e oilskin and blankets No more on the d ocks I'll be seen Just tell me old shipmates, I'm taki ng a trip mates And I'll see you someday on Fiddlers Green

W here the skies are all clear and there's never a gale And the fish jump on board with one swish on their tail Where you lie at your leisure, there's no work to do And the skipper's below making tea for the crew

N ow Fiddler's Green is a place I've heard tell Where the fishermen go if they don't go to hell W here the weather is fair and the dolphins do play And the cold coast of Greenland is fa r, far away

Now I don't want a harp nor a halo, not me Just give me a breeze and a good rolling sea I'll play me old squeeze-box as we sail along W ith the wind in the riggin to sing me a song