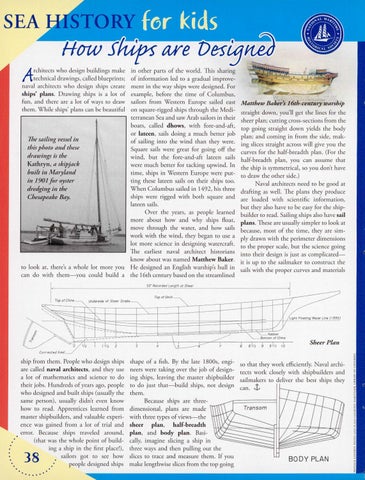 in ocher pares of the world. This sharing of information led to a gradual improvement in the way ships were designed. For example, before the time of Columbus, sailors from Western Europe sailed east on square-rigged ships through the Mediterranean Sea and saw Arab sailors in their boats, called dhows, with fore-and-aft, or lateen, sails doing a much better job The sailing vessel in of sailing into the wind than they were. this photo and these Square sails were great for going off the drawings is the wind, but the fore-and-aft laceen sails Kathryn, a skipjack were much better for tacking upwind . In built in Maryland time, ships in Western Europe were putin 1901 for oyster ting these laceen sails on their ships too. When Columbus sailed in 1492, his three dredging in the ships were rigged with both square and Chesapeake Bay. lateen sails. Over the years, as people learned more about how and why ships float, move through the water, and how sails work with the wind, they began to use a lot more science in designing watercraft. The earliest naval architect historians know abo ut was named Matthew Baker. to look at, there's a whole lot more yo u H e designed an English warship's hull in can do with them-you could build a the 16th century based on the streamlined

Matthew Bak~r's 16th-century warship straight down, you'll get the lines for the sheer plan; cutting cross-sections from the top going straight down yields the body plan; and coming in fro m the side, making slices straight across will give you the curves for the half-breadth plan. (For the half-breadth plan, you can ass ume chat th e ship is symmetrical, so you don't have to draw the other side.) Naval architects need to be good at drafting as well. The plans they produce are loaded with scientific information, but they also have to be easy for the shipbuilder to read. Sailing ships also have sail plans. These are usually simpler to look at because, most of the time, they are simply drawn with the perimeter dimensions to the proper scale, but the science going into their design is just as complicatedit is up to the sailmaker to construct the sails with the proper curves and materials

ship from chem. People who design ships are called naval architects, and they use a lot of mathematics and science to do their jobs. Hundreds of years ago, people who designed and built ships (usually the sam e person) , usually didn't even know how to read. Apprentices learned from m aster shipbuilders, and valuable experience was gained from a lot of trial and error. Because ships traveled aro und, (that was the whole point of building a ship in the first place!) , sailors got to see how people designed ships

shape of a fish. By the late 1800s, engi- so chat they work efficiently. Naval archineers were taking over the job of design- tects work closely with shipbuilders and ing ships, leaving the master shipbuilder sailmakers to deliver the best ships they to do just chat-build ships, not design can. !, them. Because ships are threedimensional, plans are made with three types of views-the sheer plan, half-breadth plan, and body plan. Basically, imagine slicing a ship in three ways and then pulling our the slices to trace and measure them. If you BO DY PLAN make lengthwise slices from the top go ing