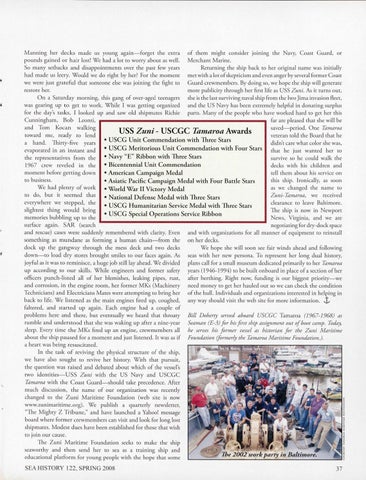 Manning her decks made us young again-forger the extra of them might consider joining the Navy, Coast G uard, or pounds gained or h air lost! We had a lot to worry abo ut as well. Merchant Marine. So many setbacks and disappointments over the past few years Returning the ship back to her original name was initially had made us leery. Would we do right by her? For the moment m et with a lot of skepticism and even anger by several former Coast we were just grateful that someone else was joining the fight to G uard crewmembers. By doing so, we hope the ship will generate restore her. more publicity through her first life as USS Zuni. As it turns out, On a Saturday morning, this gang of over-aged teenagers she is the last surviving naval ship from the Iwo Jima invasion fleer, was gearing up to get to work. While I was getting organized and the US Navy has been extremely helpful in donating surplus for the day's tasks, I looked up and saw old shipmates Richie parts. Many of the people who have worked hard to get her this Cunningham, Bob Leonti, far are pleased that she will be and Tom Kocan walking saved-period. One Tamaroa USS Zuni - USCGC Tamaroa Awards toward me, ready to lend veteran told the Board that he • USCG Unit Commendation with Three Stars a hand. 1hrty-five years didn't care what color she was, • USCG Meritorious Unit Commendation with Four Stars that he just wanted her to evaporated in an instant and • Navy "E" Ribbon with Three Stars the representatives from the survive so he could walk the 1967 crew reveled in the • Bicentennial Unit Commendation decks with his children and moment before getting down tell them abour his service on •American Campaign Medal to business . this ship. Ironically, as soon • Asiatic Pacific Campaign Medal with Four Battle Stars We had plenty of work as we changed the name to • World War II Victory Medal to do, but it seemed that Zuni-Tamaroa, we received • National Defense Medal with Three Stars everywhere we stepped, the clearance to leave Baltimore. • USCG Humanitarian Service Medal with Three Stars slightest thing would bring The ship is now in Newport • USCG Special Operations Service Ribbon memories bubbling up to the News, Virginia, and we are surface again. SAR (search negotiating for dry-dock space and rescue) cases were suddenly remembered with clarity. Even and with organizations for all manner of equipment to reinstall something as mundane as forming a human chain- from the on her decks. dock up the gangway through the mess deck and two decks We hope she will soon see fair winds ahead and following down-to load dry stores brought smiles to our faces again. As seas with her new persona. To represent her long dual history, joyful as it was to reminisce, a huge job still lay ahead. We divided plans call for a small museum dedicated primarily to her Tamaroa up according to our skills. While engineers and former safety years (1946-1994) to be built on board in place of a section of her officers punch-listed all of her blemishes, leaking pipes, rust, after berthing. Right now, funding is our biggest priority-we and corrosion, in the engine room, her former MKs (Machinery need money to get her hauled out so we can check the condition Technicians) and Electricians Mates were attempting to bring her of the hull. Individuals and organizations interested in helping in back to life. We listened as the main engines fired up, coughed, any way should visit the web site for more information. J, faltered, and started up again. Each engine had a couple of problems here and there, but eventually we heard that throaty Bill Doherty served aboard USCGC Tamaroa (1967-1968) as rumble and understood that she was waking up after a nine-year Seaman (E-3) for his first ship assign.ment out of boot camp. Today, sleep. Every time the MKs fired up an engine, crewmembers all he serves his former vessel as historian for the Zuni M aritime about the ship paused for a moment and just listened. Ir was as if Foundation (formerly the Tamaroa Maritime Foundation.). a heart was being resuscitated. In the task of reviving the physical structure of the ship, we h ave also sou ght ro revive her history. With that pursuit, the question was raised and debated about which of the vessel's two identities-USS Zuni with the US Navy and USCGC Tamaroa with the Coast Guard-sho uld take precedence. After much discussion , the name of our organization was recently changed to the Z uni Maritime Foundation (web sire is now www.zunimaritime.org) . We publish a quarterly newsletter, "The Mighty Z Tribune,'' and have launched a Yahoo! message board where former crewmembers can visit and look for long lost shipmates. Modest dues have been established for those that wish to join our cause. The Z uni Maritime Foundation seeks to make the ship seaworthy and then send her ro sea as a training ship and educational platform for yo ung people with the hope that some