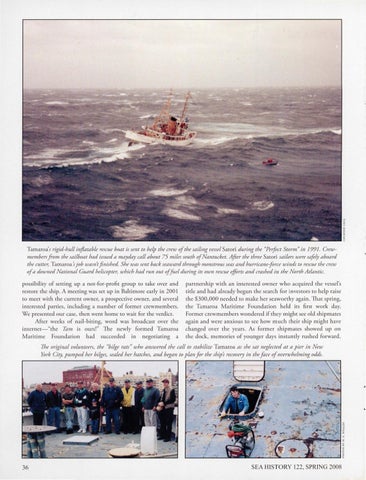 Tamaroa' s rigid-hull inflatable rescue boat is sent to help the crew ofthe sailing vessel Satori during the "Perfect Storm" in 1991. Crewmembers from the sailboat had issued a mayday call about 75 miles south ofNantucket. After the three Satori sailors were safely aboard the cutter, Tam aroa s job wasn't finished. She was sent back seaward through monstrous seas and hurricane-force winds to rescue the crew ofa downed National Guard helicopter, which had run out of.fa.el during its own rescue efforts and crashed in the North Atlantic. possibili ry of serring up a nor-for-profi r gro up to rake over and restore rh e ship. A meering was sec up in Balrimo re early in 2001 to meer wirh rhe currenr owner, a pros pecrive owner, and several inreresred parries, including a number of form er crewmem bers. We presenred our case, rhen we nr home to wair fo r rhe verdicr. Afre r weeks of nail-bi ring, wo rd was broadcas r over rhe inrern er- "rhe Tam is o urs! " The newly form ed Tamaroa Maririme Fo undarion had succeeded in nego n ar mg a

The original volunteers, the "bilge rats" who answered the call to stabilize Tamaroa as she sat neglected at a pier in New York City, pumped her bilges, sealed her hatches, and began to plan for the ships recovery in the face of overwhelming odds. /