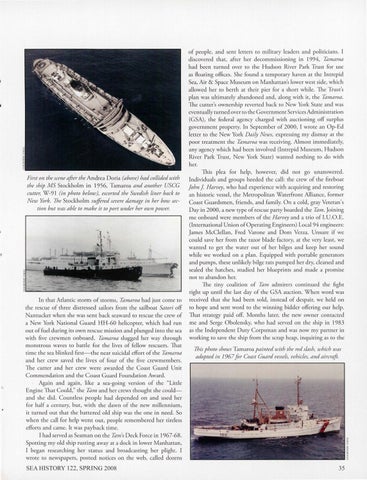 First on the scene after the Andrea Doria (a bove) had collided with the ship M S Stockholm in 1956, Tamaroa and another USCG cutter, W-91 (in photo below), escorted the Swedish liner back to New Yo rk. The Stockholm suffered severe damage in her bow section but was able to make it to port under her own power.

In that Atlantic storm of storms, Tamaroa had just come to the rescue of three distressed sailors from the sailboat Satori off N antucket when she was sent back seaward to rescue the crew of a New York Natio nal G ua rd HH-60 helicopter, which had run o ut of fuel during its own rescue missio n and plunged in to th e sea with five crewmen onboard. Tamaroa slugged her way thro ugh monstrous waves to battle for the lives of fellow rescuers. Thar rime the sea blinked first- the near suicidal effo rt of the Tamaroa and her crew saved the lives of four of th e fi ve crewmembers. The cutter and her crew we re awarded the Coast Guard Unit Commendation and the Coas t Guard Fo und ati o n Award. Again and again , like a sea-going version of the &quot;Little Engine Thar Could,&quot; the Tam and her crews thought she co uldand she did. Countless peo ple had depended on and used her fo r half a century, but, with the dawn of the new millennium , it turned out that the battered old ship was the one in need. So when the call for help went o ut, people remembered her tireless efforts and came. Ir was payback time. I had served as Seam an o n the Tam&#39;s D eck Force in 1967-68. Spo tting my old ship rusting away at a dock in lower M anhattan, I began researching her status and broadcasting her plight. I wrote to newspapers, pos ted notices on the web, called dozens SEA HISTORY 122, SPRJNG 2008

of people, and sent letters to military leaders and politicians. I discovered that, after her decommissioning in 1994, Tamaroa had been turned over to the Hudson River Park Trust fo r use as floating offices. She fo und a temporary haven at the Intrepid Sea, Air &amp; Space Museum o n M anhattan&#39;s lower west side, which allowed her to berth at their pier for a sho rt while. The Trust&#39;s plan was ultimately abando ned and, along with it, the Tamaroa. The cutter&#39;s ownership reverted back to New York State and was eventually turned over to th e Government Services Administrati on (G SA), the federal agency charged with auctioning off surplus government property. In September of 2000, I wrote an Op-Ed letter to the New York Daily News, expressing my dismay at the poor treatment the Tamaroa was receiving. Al most immedi ately, any agency which had been involved (Intrepid M useum , Hudson River Park Trust, N ew Yo rk State) wanted nothing to do with her. This plea for help, however, did not go un answered. Individuals and groups heeded the call: the crew of rhe fireboat john J H arvey, who had experience with acquiring and restoring an historic vessel, the M etropolitan Waterfront Alliance, former C oas t G uardsmen, fri ends, and family. O n a co ld, gray Veteran &#39;s D ay in 2000 , a new type of rescue parry boarded the Tam. Joining m e onboa rd were members of the H arvey and a trio of I.U.O .E. (International Union of Operating Engineers) Local 94 engineers: James McC lellan, Fred Va rone and D o m Vezza. U nsure if we could save her from the razo r blade factory, at the ve ry least, we wanted to get the water our of her bilges and keep her sound while we wo rked on a plan . Equipped with portable generarors and pumps, these unlikely bilge rats pumped her dry, cleaned and sealed the hatches, studied her blueprints and m ade a promise not to abandon her. Th e tiny coalition of Tam admi rers continued the fight right up until the las t day of the GSA auction . W hen wo rd was received that she had been sold, instead of despair, we held on to hope and sent word to the winning bidder offering our help. That strategy paid off. M onths later, the new owner contacted me and Serge Obolensky, who had served on the ship in 1983 as the Independent Oury Corpsm an and was now my partner in working to save the ship from the scrap heap, inquiring as to the This p hoto shows Tam aroa painted with the red slash, which was adop ted in 19 67 far Coast Guard vessels, vehicles, and aircraft.