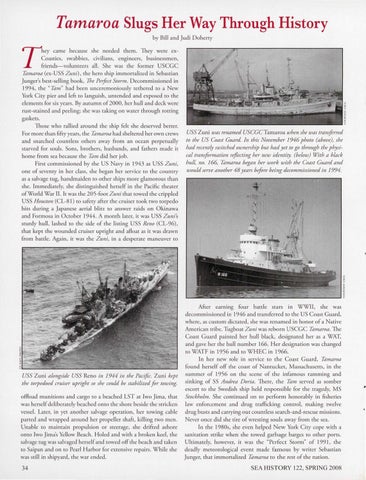 hey came because she needed them. They were exCoasries, swabbies, civilians, engineers, businessmen , fri ends-volunteers all. She was the fo rmer USCGC Tamaroa (ex-USS Zuni), the hero ship immortalized in Sebastian Junger&#39;s best-selling book, The Perfect Storm. D ecommissioned in 1994, the &quot;Tam&quot; had been unceremo nio usly te thered to a New York C ity pier and left to languish , untended and exposed to the elements for six years. By aurumn of2000, her hull and deck were rust-stained and peeling; she was raki ng on water th ro ugh ro tting gaskets. Those who rallied aro und the ship felt she deserved better. For mo re than fl fry years, the Tamaroa had sheltered her own crews and snatched co untless o thers away fro m an ocean perperually starved fo r so uls. Sons, bro thers, husbands, and fa thers made it home fro m sea because the Tam did her job. First commissio ned by rhe US Navy in 1943 as USS Zuni, one of seventy in her class, she began her service ro the country as a salvage rug, handmaiden to other shi ps more glamoro us than she. Immediately, she distinguished herself in th e Pacific theater of Wo rld War II. Ir was the 205-foo r Zuni that rowed the crippled USS H ouston (CL-8 1) to safety after the cruiser rook two rorpedo hits during a Japanese aerial blitz to answer raids o n O kinawa and Formosa in October 1944. A m onth later, it was USS Zuni&#39;s srurdy hull, lashed to the side of the listing USS Reno (CL-96), that kept the wo unded cruiser upright and afloat as it was drawn from battle. Agai n, it was the Zuni, in a desperate maneuver to

USS Zuni alongside USS Reno in 1944 in the Pacific. Z uni kept the torpedoed cruiser up right so she could be stabilized fa r towing. offl oad munitio ns and cargo to a beached LST at Iwo Jima, that was herself deliberately beached o nto th e sho re beside the stricken vessel. Later, in yet another salvage o peratio n, her rowing cable parred and wrapped aro und her pro peller shaft, killing two men. Unable ro maintain propulsion or steerage, she dri fte d as hore o nto Iwo Ji ma&#39;s Yellow Beach . Holed and with a broken keel, the salvage ru g was salvaged herself and rowed off the beach and taken to Saipan and on to Pearl H arbor fo r extensive repairs. While she was still in shipyard, the war ended .

USS Z uni was renamed USCGCTam aroa when she was transferred to the US Coast Guard. In this Novem ber 1946 photo (above), she had recently switched ownership but had yet to go through the physical transformation reflecting her new identity. (below) With a black hull, no. 166, Tamaroa began her work with the Coast Guard and would serve another 48 years before being decommissioned in 1994. _,

After earning fo ur battle stars in WWII, she was decommissio ned in 1946 and transferred to the US Coas t G uard, where, as custom dictated, she was ren am ed in hono r of a Native American tribe. Tugboat Zuni was reborn USCGC Tamaroa. Th e Coast Guard painted her hull black, designated her as a WAT, and gave her rhe hull n umber 166. H er designation was changed to WATF in 1956 and to WHEC in 1966. In her new role in service to the Coast G uard, Tamaroa fo und herself off the coast of Nantucket, Massachusetts, in the summer of 1956 on the scene of the in fa mo us ramming and sin king of SS Andrea Doria. There, the Tam served as somber escort to rhe Swedish ship held respon sible for rhe tragedy, M S Stockholm. She continued on to perfo rm honorably in fish eries law enforce ment and drug traffi cking control, making twelve d rug busts and carrying our countless search-and-rescue missions. Never o nce did she tire of wresting souls away fro m the sea. In the 1980s, sh e even helped New Yo rk C ity cope with a san ita tion strike when she rowed garbage barges to other po rts. Ultima tely, however, it was rhe &quot;Perfect Storm&quot; of 1991 , the deadly meteorological event made fam ous by writer Sebas tian Junger, that immortalized Tamaroa to the rest of the nation . SEA HISTORY 122, SPRING 2008