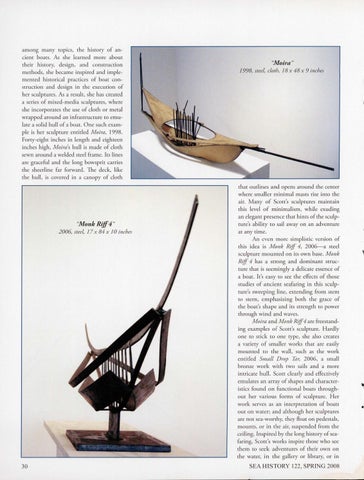 am ong m any to pics, the history of ancient boats. As she learned mo re about their history, design, and co nstruction m ethods, she becam e inspired and implemented historical practices of boat construction and design in the execution of her sculptu res . As a result, she has created a series of mixed-med ia sculptures, where she incorporates the use of clo th o r m etal wrapped aro und an in frastr ucture to emulate a solid hull of a boat. O ne such example is her sculp ture entitled Moira, 1998. Forry-eight inches in length and eighteen inches high, Moira's hull is made of clo th sewn aro und a welded steel fram e. Its lines are graceful and the long bowsprit carries the sheerline far fo rward. The deck, like the hull, is covered in a canopy of cloth

that outlines and opens around the center where smaller minimal masts rise into the air. M any of Scott's sculptures maintain this level of minimalism , while exuding an elegant presence that hints of the sculpture's abiliry to sail away on an adventure at any time. An even more simplistic version of this idea is Mo nk Riff 4, 2006-a steel sculpture mounted on its own base. Mo nk Riff 4 has a strong and dominant structure that is seemingly a delicate essence of a boat. It's easy to see the effects of those studies of ancient seafaring in this sculpture's sweeping line, extending from stem to stern, emphasizing both the grace of the boat's sh ape and its strength to power through wind and waves. M oira and Mo nk Riff4 are freestanding examples of Scott's sculpture. Hardly one to stick to one rype, she also creates a variery of smaller works that are easily mounted to the wall, such as the work entitled Small D rop Tar, 2006, a small bronze work with rwo sails and a more intricate hull. Scott clearly and effectively emulates an array of shapes and characteristics found on fun ctional boats througho ut her various forms of sculpture. Her work serves as an interpretation of boats out on water; and although her sculptures are n ot sea-worthy, they float on pedestals, m o unts, or in the air, suspended from the ceiling. Inspired by the lo ng history of seafaring, Scott's works inspire those who see them to seek adventures of their own on the water, in the gallery or library, or in