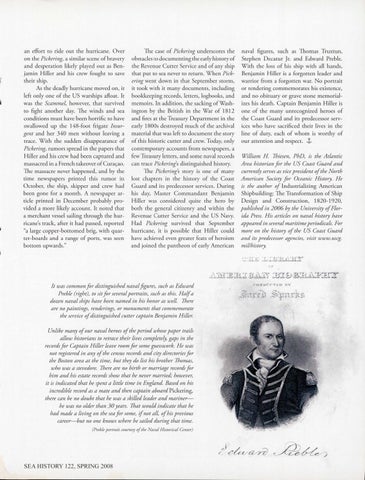 an effort to ride out the hurricane. O ver on the Pickering, a similar scene of bravery and desperation likely played out as Benjamin Hiller and his crew fought to save their ship. As the deadly hurricane moved on, it left only one of the US warships afloat. It was the Scammel, however, that survived to fight another day. The winds and sea conditions must have been horrific to have swallowed up the 148-foot frigate Insurgent and her 340 men without leaving a trace. With the sudden disappearance of Pickering, rumors spread in the papers that Hiller and his crew had been captured and massacred in a French takeover of Cura<;:ao. The massacre never happened, and by the time newspapers printed this rumor in October, the ship, skipper and crew had been gone for a month. A newspaper article printed in December probably provided a more likely account. It noted that a merchant vessel sailing through the hurricane's track, after it had passed, reported "a large copper-bottomed brig, with quarter-boards and a range of ports, was seen bottom upwards."

The case of Pickering underscores the naval figures, such as Thomas Truxtun, obstacles to documenting the early history of Stephen Decatur Jr. and Edward Preble. the Revenue Cutter Service and of an y ship With the loss of his ship with all hands, that put to sea never to return. When Pick- Benjamin Hiller is a forgotten leader and ering went down in that September storm, warrior from a forgotten war. No portrait it took with it many documents, including or rendering commemorates his existence, bookkeeping records, letters, logbooks, and and no obituary or grave stone memorialm emoirs. In addition, the sacking of Wash- izes his death. Captain Benjamin Hiller is ington by the British in the War of 1812 one of the many unrecognized heroes of and fires at the Treasury D epartment in the the Coast G uard and its predecessor servearly 1800s destroyed much of the archival ices who have sacrificed their lives in the material that was left to document the sto ry line of du ty, each of whom is worthy of of this historic cutter and crew. Today, only our attention and respect. ,t contemporary acco unts from newspapers, a few Treasury letters, and som e naval records William H. Thiesen, PhD, is the Atlantic can trace Pickerings distinguished history. Area historian for the US Coast Guard and The Pickering's story is one of many currently serves as vice president ofthe North lost chapters in the history of the Coast American Society for Oceanic H istory. H e Guard and its predecesso r services. During is the author of Industrializing American his day, Master Commandant Benjamin Shipbuilding: The Transformation of Ship Hiller was co nsidered quite the hero by Design and Construction, 1820-1920, both the general citizenry and wi thin the published in 2 006 by the University ofFlorRevenue C utter Service and the US Navy. ida Press. His articles on naval history have Had Pickering survived that September appeared in several maritime periodicals. For hurri cane, it is possible that Hiller could more on the history of the US Coast Guard have achi eved even greater feats of heroism and its predecessor agencies, visit www. uscg. and joined the pantheon of early Ame rican mil/history.

.,. It was common for distinguished naval figures, such as Edward Preble (righ t), to sit for several portraits, such as this. Half a dozen naval ships have been named in his honor as well. There are no paintings, renderings, or monuments that commemorate the service ofdistinguished cutter captain Benjamin Hiller. Unlike many of our naval heroes ofthe period whose paper trails allow historians to retrace their lives completely, gaps in the records for Captain H iller leave room for some guesswork. H e was not registered in any ofthe census records and city directories for the Boston area at the time, but they do list his brother Thomas, who was a stevedore. There are no birth or marriage records for him and his estate records show that he never married; however, it is indicated that he spent a little time in England. Based on his incredible record as a mate and then captain aboard Pickering, there can be no doubt that he was a skilled leader and marinerhe was no older than 3 0 years. That would indicate that he had made a living on the sea for some, if not all, ofhis previous career-but no one knows where he sailed during that time. (Preble portrait courtesy ofthe Naval Historical Cente1)